← Tempest of Bravoure: Kingdom Ascent
Little Dragon Came To Be →

Tumbleweed and Dreams: A Novel 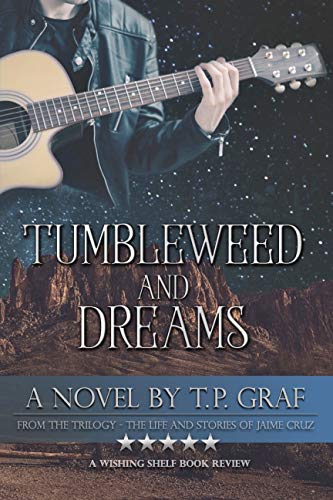 Some people are impulsive, and some are very calculating and measure every move before they make it. Others wait for someone to tell them what to do and when to do it. Then there is Jaime. When Jaime decides to begin life anew, he does it based on a movie. Not everyone can say they look to settle in the town in which a movie was set, but Jaime can. He’s a man with a plan to have no plan and looks forward to seeing what his future may hold in Fort Davis, Texas. With absolutely no idea how he will make a living and no long term plans, Jaime sets out on his own to make his way in the world.

Tumbleweed and Dreams: Book I From the Trilogy – The Life and Stories of Jaime Cruz by T.P. Graf, chronicles the experiences of Jaime Cruz as he starts a new life in a sleepy Texas town. He has left behind a life in California that was less than successful and has begun to haunt him. Jaime is looking for a fresh start in every aspect of his life, and holds out hope that he will not only find his way to a rewarding career but also to a meaningful relationship. As Jaime begins to shape his life in Texas, he meets and becomes close to one character after another, each with his or her own unique story to share.

This is a book as much about relationships as it is the main character’s plight. Graf has given readers a beautifully crafted tale. From the intricate descriptions of the diverse cultures found in Texas to Jaime’s thoughtful exploration of religion, the author shows readers a depth not often found in most works of fiction. Jaime is an especially introspective character, and readers find themselves growing closer to him throughout the course of his story.

Graf manages to keep readers enthralled with Jaime’s day-to-day experiences chapter after chapter. While this first in a series is not a thriller or especially dramatic in its own right, it is captivating due to the author’s ability to present a well-developed main character who reaches out and grabs readers by the hand and carries them along on the journey that is beginning to shape his new life.

I recommend Tumbleweed and Dreams: Book I From the Trilogy – The Life and Stories of Jaime Cruz to any reader looking for a beautifully penned tale of self-discovery and a strong main character who stands out in a crowd. Jaime Cruz, a memorable and relatable figure, will linger in readers’ minds far beyond the final page.

← Tempest of Bravoure: Kingdom Ascent
Little Dragon Came To Be →