← The Reader Can Feel Her Pain
Tumbleweed and Dreams: A Novel → 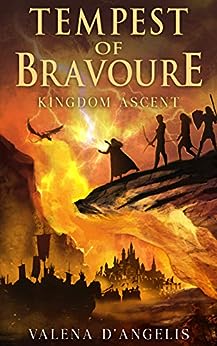 Ahna has all the powers needed to do great damage or be a great asset. As a dark elf, it is not likely she will be welcome in this battle as a rebel. She has spent many years secluded and trying to push aside all memories of the battle that was lost by her people. Her time has been spent trying to separate herself from those days. Despite all her efforts, things have come full circle, and she is being coerced into escaping seclusion and heading into battle once more. Will Kairen’s pleas be enough to bring Ahna to the forefront of the war?

Tempest of Bravoure: Kingdom Ascent, by Valena D’Angelis, is a beautifully vivid fantasy novel focused on the life of Ahna, who is dokkalfar. Her personality, her appearance, and her unique set of skills all combine to make a memorable character and a force with which to be reckoned. Ahna is one of those female leads readers will love from the moment she graces the pages. Her energy is pure, and her determination is strong.

Fantasies, when well done, have a certain beauty all their own. D’Angelis has mastered exactly that in a story filled with adventure, peril, and self-discovery. The descriptions of the landscape are particularly breathtaking and truly make the story all the more riveting. In addition, the author has created a fascinating cast of characters and beings; their world is one that draws readers directly into the story. D’Angelis’s work is not short on action. Page after page, Ahna and her comrades find themselves in the throes of a battle that never seems to end. The magical energy and abilities Ahna possesses make each and every one of their clashes that much more intriguing. As splendid a setting and as full of adventure and action as it is, I would love to have seen more of a focus on the backstories of the main characters.

I was especially touched by the dynamic between Kairen and Ahna. The rescue that brought the two together sets the stage for a close and loving relationship. Ahna, a mentor and sister figure to Kairen, spends a great deal of her time modeling appropriate behavior and teaching Kairen to prepare for the rebellion in which she would one day participate. She is as much a mother as she is a trainer.

Tempest of Bravoure: Kingdom Ascent is an emotionally charged adventure that sword and sorcery fans will devour. Author Valena D’Angelis is adept at creating a mystical world that seems like we’re only scratching the surface of some deeper lore.

← The Reader Can Feel Her Pain
Tumbleweed and Dreams: A Novel →