← Into His Psyche
Touch My Head Softly → 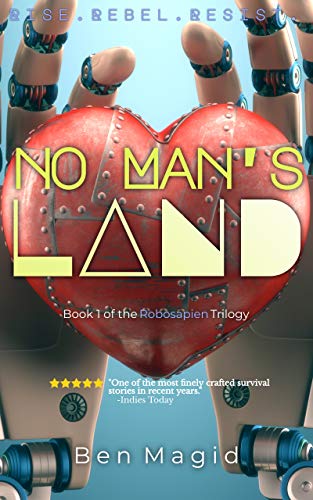 No Man’s Land by Ben Magid is a science fiction thriller set in a dystopian world where robots have killed all humans. All except the last girl remaining on Earth– Rebel Anne Rae. She learns how to disguise herself and her behavior to pass undetected as a human being among the robots, collectively known as the Mech. Under her care is a Mech called Thomas, for whom she creates a heart. Thomas slowly gains emotions, curiosity and basically evolves towards becoming a singularity. Together they work to reunite Rebel with her species.

Rebel was a great character- nerdy, strong, and resourceful. In some ways, she reminded me of Mark Watney’s character from The Martian. She keeps finding ways out of sticky situations, never despairing for too long. However, it is nowhere near as science-heavy as The Martian.  Technical details about the Mech are hastily explained or just skipped, but it makes up in adventure what it lacks in scientific explanations. Sometimes science fiction can get a little slow and dense with all the intricate details about the world-building and aliens/robots, but this was definitely not the case here. Thomas was also a highlight of the book. I liked seeing his development as he acquired the capacity to feel and express emotions.

I was intrigued by the cover of this book. It’s a pair of cyborg-esque hands carefully holding a metallic heart. I’m accustomed to looking at science fiction thrillers with explosions and rockets and dark backgrounds and determined-looking individuals on the cover– so I was drawn to the bright hues of this one. The rest of the story is also just as intriguing and somewhat subversive. There was a strong female lead who was in control and not dependent on any men-related deus ex machinas to save the day. There were also fun references thrown in the mix, like to Malcolm Gladwell’s ten thousand hour rule in Outliers. The Mech were bizarrely given real human names, like Thomas Jefferson. All these unexpected nuggets made the story a lot more odd and interesting.

While the idea of robots taking over humanity is a bit of a trope at this point, Ben Magid uses his solid literary skills to create an imaginative future with intriguing characters that will keep you invested throughout the story. It was a lighter but equally gripping story about a girl’s quest to fight the odds. No Man’s Land is for science fiction enthusiasts as well as for readers looking for an engrossing young adult novel that never forgets to entertain it’s readers.

← Into His Psyche
Touch My Head Softly →