← The Friendship Between Man and Dragon
Decades of Studying Dogmatism → 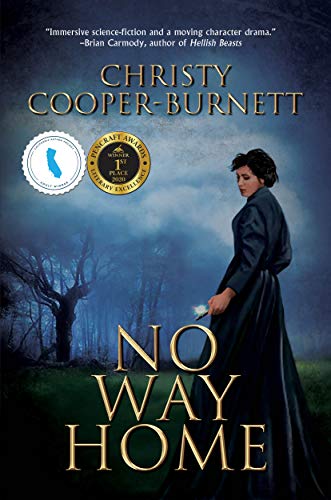 No Way Home by Christy Cooper-Burnett is an adventurous time travel story about Christine Stewart who is a time traveler that works for Cyber Criminal Enforcement Agency (the CCEA), Los Angeles Division for a living. She escorts convicted cybercriminals back in history as a sentence for their crimes until 2070 when she takes a routine visit to Piedmont, Oklahoma in 1867, she gets stranded and is forced to hide while she waits for rescue, and a local man, John Harding takes her in after her prisoner abandons her. The CCEA’s malfunctioning transporter did not only trap her but also other time travelers who were on different missions at the time.

Author Christy Cooper-Burnett is economical with words but is still able to create a richly atmospheric world. This time travel romance is filled with intriguing characters that face one suspenseful event after another. Vivid descriptions throughout the story ensure we are well placed in the dusty trails of Oklahoma in 1867. This is an excellent contrast to the future year 2070. This stimulating contrast between times and worlds reminds me of the show Westworld, minus the robots, but with the same excellent story telling. Author Christy Cooper-Burnett shows her writing expertise in how seamlessly she switches the story from one historical setting to another without losing the plot.

The friendship between Christine and Anabelle is precious as they find solace in each other while they are stranded. Christine proves her loyalty to her when she finally manages to rescue her despite the obstacles she encounters. Their story line was, to me, the most emotional and impactful, possibly because their relationship was well defined, or just because I related to them, in either case I really enjoyed following them.

No Way Home by Christy Cooper-Bunnett has created an entertaining historical fantasy novel that blends many different genres seamlessly; romance, western, adventure, science fiction. But this is still a character driven book with an imaginative story and a thrilling twist around every corner.

← The Friendship Between Man and Dragon
Decades of Studying Dogmatism →