Voyage of Pearl of the Seas 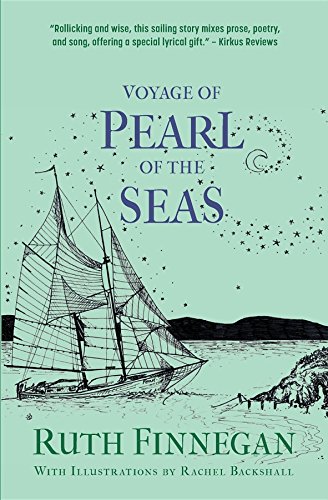 Ruth Finnegan’s Voyage of Pearl of The Seas is more than meets the eye. It is the story of two kids and a beloved dog – Chris, Kate, and Holly. They build a boat from a log they find in the sand of a beach and embark on what they hope will be a thrilling adventure.

They face unprecedented challenges, ultimately finding themselves in a fantastical land with a King much reminiscent of God. He has many names and speaks of creation and wisdom. He particularly tells stories that seem to be related to those included in Biblical text. But what is even more intriguing about him is that he gives gifts that come in handy in some of the most unlikely of situations.

While this story is full of much of the awe and wonder that you expect from a fairytale, there are some unexpected concepts here. For instance, one of the main characters, Chris is hailed as a hero yet many of his mannerisms don’t portray him as such. He seems to be inconsiderate, entitled, and even condescending, particularly to women. Several times in the story, he has disparaging thoughts about Kate. At some point, he even forgets about her and abandons her in a “wilderness”. Yet through it all, she seems to be very concerned about his needs, putting them first in many situations. And while he did eventually sacrifice his dream to save Holly, it is not much of a voluntary grand gesture but rather a last-minute decision made in a crisis. However, it must be said that the author does a great job at weaving together the different facets of this story – the physical, emotional, and the fantastical.

That aside, the language used is poetic, adding a creative lyrical aspect to this story. There are songs, poems, and unexpected dialogue embedded within the flowery prose.

There is one thing that’s clear though- Kate’s timidity seems to increase across the narrative, most times directly proportional to Chris’ arrogance. To some extent, it feels that they are symbols. Voyage of Pearl of The Seas is an emotive and intellectually-invigorating fairy tale that is creative and deeply thought-provoking.