← Loved by Night: Trapped in the Triangle of Love
The Rules of a Big Boss: A book of Self-Love → 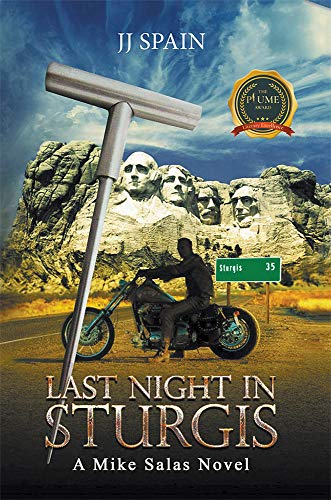 Last Night in Sturgis written by JJ Spain is the first book in a Mike Salas detective series. The novel follows Salas’ journey as he hunts for a killer who is attending the largest motorcycle rally in the world with over one million riders.

The eventual setting of Last Night in Sturgis is predictably, Sturgis, South Dakota. Prior to this, the setting rolls through various towns and cities across the United States on the way to Sturgis. The descriptions are rich and colorful and immediately draw the reader into the story. Author JJ Spain describes the natural landscapes and cities in detail; however the most vivid descriptions are saved for the numerous motorcycles in the book! Descriptions include visual sights, smells and sounds, which all serve to give this contemporary mystery novel an authentic feel.

There are a large number of characters in Last Night in Sturgis including vivid descriptions of all the characters physical appearances and even their clothing. The free flowing dialogue also helps to differentiate the many varied characters. The two main characters are described in complete detail, which really delivers a complete portrait of our protagonist. Detective Salas’ character is further developed through his somewhat dubious actions, his sharp dialogue and interactions with other characters – particularly his partner – a new police officer named Ronnie. Albert, the character Salas is searching for is also well developed, and I really enjoyed the insight we get into his dark and disturbed mindset. This is given through monologue in the chapters he narrates which provides variation to the tone and atmosphere of the story. His motivation and fixation on the past lead him on a journey with far reaching consequences.

The storyline is easy to follow, which is a benefit since the various colorful characters pull you in many directions, but the mystery at the heart of the story is still alluring.

Last Night in Sturgis is an entertaining crime fiction novel. The setting is richly described with numerous intriguing characters and a plot that follows a traditional structure but has enough twists and turns that transforms this standard murder mystery into a riveting crime thriller.

← Loved by Night: Trapped in the Triangle of Love
The Rules of a Big Boss: A book of Self-Love →