← Some Terrorible Company To Keep
Victoria by Deceit of the Pants → 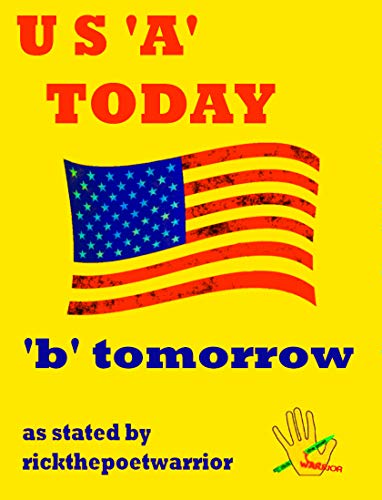 U.S. ‘A’ Today ‘b’ Tomorrow is an in-depth discussion of United States society during the era of Trump and his administration. The poem anthology covers topics ranging from the US elections to foreign policy to racism to class to gun violence.

As an American reading the work, it was infuriating mostly because being reminded of such events makes the brain hurt, but Rickthepoetwarrior handles the difficult situation with his usually clever, yet puerile humor. While I was extremely frustrated by the topics discussed in the book, I suspect by design, there were many poems that had me guffawing such as “What I Wish for Donald Trump’s Hell”.

Because the book is written by a Canadian author it does offer an international perspective on the events of the past four years which is quite interesting to read. The snappy poems that often include plays on words or interesting charts and diagrams hold the reader’s attention and make for a dynamic and quick read. Readers will be crying from both anger and laughter while reading this anthology, but it is oddly inspiring in a way. It motivates the reader to attempt to improve their world and the world of others. For that, I highly recommend and commend Rickthepoetwarrior.

← Some Terrorible Company To Keep
Victoria by Deceit of the Pants →