← A Treasure Mystery
Hijacked My Life →

Hale: The Rise of the Griffins 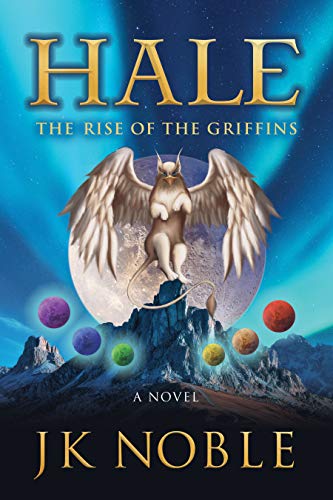 A story rich in family and betrayal, Bayo, a Griffin elder attempts to build an army and exploit the powers of the griffins in order to free his people. The Eyes are the key, the portals to other divisions allowing characters to stay connected throughout their perilous journeys, to protect themselves and their loved ones. After many years of suppression and suffering at each other’s hands, each character is on their own mission to try and fulfil their individual prophecies, no matter the cost.

A gripping piece of fantasy writing, Hale, Rise of the Griffins is a magical tale which leaves the reader with a thirst for more. Although, some of the story is dictated to the reader, there are many elements throughout the writing where the imagery conveyed creates a vivid picture in the readers mind.

The creative mind of JK Noble, has conjured a world fueled by magic and mythology. An array of intriguing characters is represented through their different mannerisms and dialects which has been created wonderfully. The different perspectives and plots which are running simultaneously are cleverly written and allow the reader to experience the various points of view and ultimately see how their stories are connected.

Through descriptions of settings and elements such as the unique modes of transport, the writer has been able to create their own universe. Towards the start of the book and during the prologue you get the sense that you have travelled back in time, despite the dates which appear at the start of various chapters. However, as you read on there are references to modern day technology. Personally, I felt that the dates were not necessary to the story, and for me the time at which the story is set is before cars, when journeys were taken by horse and cart. The beauty of this non specific time period is that the reader can reach their own conclusion.

The imagination and detail that has gone in to creating such a magnificent world is spectacular. I would have enjoyed a more detailed dive into this riveting world being built along with more opportunities for a clever metaphor to unleash my imagination. The intricacy of the parallel plots is written in a thrilling yet comprehensive way. I am definitely interested in finding out what is going to happen next to Hale, Marcus, Ellionna, and Mary.

Hale: The Rise of the Griffins is a suspenseful adventure novel with a unique world and compelling characters that will appeal to any fantasy reader looking for a story with plenty of depth and action.

← A Treasure Mystery
Hijacked My Life →