← The Anachronist
A Courageous Young Winnie → 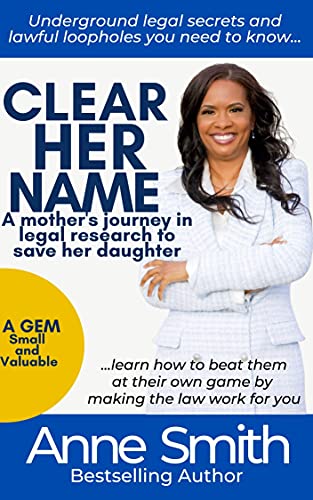 Clear Her Name by Anne Smith details her personal and life changing journey of having to witness the judicial system fail her daughter and her relentless attempt in clearing her name. Clear Her Name shares everything that Anne Smith learned along the way in a short but highly informative legal guide.

After being prescribed a wrong mixture of drugs after oral surgery, it resulted in Smith’s daughter having a psychotic break and being jailed for attempted murder. Smith recalls every attempt she made to try and have her daughter’s story heard and prove her innocence. She mentions how she tried to get help from a man named David, who had also experienced a similar fate like her daughter only in Canada, but turned out to be just a con man who abused his experience to exploit other families.

Smith also argues that attorneys aren’t made to help you and don’t care about the facts, they make biased opinions on a case and build their defense against that rather than what might be factual. She also condemns the system for being rigged and allowing lawyers to manipulate their clients and leaving normal people defenseless.

Author Anne Smith provides an in depth explanation of the events that transpired. It’s a harrowing legal battle that is portrayed in riveting detail. The experiences that are shared in this book are definitely scary but provides a window into a harsh reality of the legal system we have. The book also includes definitions for legal terms as well as tips that can help the layman navigate the legal system. This is a phenomenal memoir and informative legal guidebook that will help you prepare for the worst and enable you to fight within the system and win.

← The Anachronist
A Courageous Young Winnie →