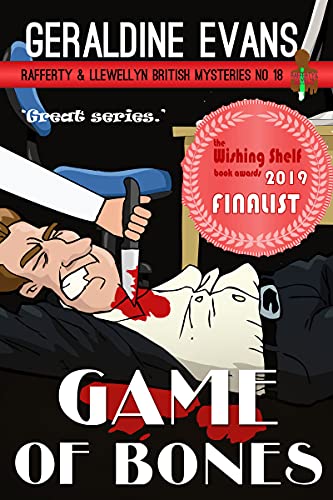 At first glance, the murder of University Administrator Rupert Hunter-York seems too good to be true. All roads lead to one Professor Babbington, an alcoholic professor with a less-than-savory personality (to say the least). With the mountain of evidence falling on Detective Joe Rafferty’s lap, he thinks that this is an open-and-shut case. It could have been if it weren’t for his right-hand man ​​Sergeant Llewellyn. Now it turns out that the case is far more complicated than what anyone could ever imagine.

Geraldine Evans’ 18th installment to the Rafferty & Llewellyn British Mysteries begins with a warning for its heavy use of British slang, and even offers a handy list in the back to familiarize readers. I’m happy to report that this is a smooth and readable novel, even for non-British readers. Anyone with a grasp of context clues can easily understand the narration and the inner workings of Rafferty’s mind.

It’s him that we follow throughout the novel, and what a surprisingly cozy place it is for a grizzled detective. While he fusses over the case almost non-stop, we also see him worrying about his baby sister and yearning to get home to his beloved daughter Neeve. He is a flawed man, as we see how his biases can sometimes get in the way of the investigation. But that’s precisely what makes him lovable in the first place. He’s relatable and human and a well-rounded character.

Speaking of well-rounded characters, Game of Bones is full of them. We’ve talked about Rafferty, but we can’t forget supporting characters like his partner Llewelyn and the babbling suspect Professor Babbington. Each character has such unique personalities reflected in their mannerisms and dialogue that they become imprinted in your mind despite how brief their roles may be. This applies even to minor characters like the icy Ms. Harriet Temple and the tight-lipped Professor Curtis.

It’s the characters that truly shine in the novel, but I felt that the pacing could have been improved. While it starts in medias res and grabs the reader’s attention from the first sentence, the excitement level fluctuates. Fortunately, the characters that populate the Game of Bones makes it a worthy addition not just to the Rafferty & Llewellyn British Mysteries but to the canon of mystery fiction as a whole. This is a gripping mystery novel that I highly recommend.