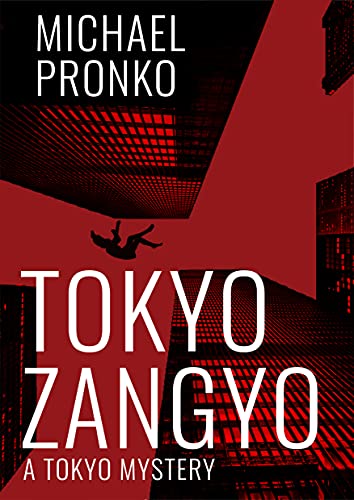 Tokyo Zangyo, by Michael Pronko, is the engrossing story of Detective Hiroshi Shimizu, who is put in charge of solving the case of murder victim Shigeru Onizuka. Under the authority of Detective Sakaguchi, Hiroshi must delve into the unsavory practices of a large corporation located in Marunouchi, Japan’s business district, to uncover the truth. As Hiroshi sets out to investigate Onizuka’s death, purposely set up to look like suicide, he finds himself entangled with questionable people and suspecting some he trusts. While considering these revelations, Hiroshi finds himself plunged into a corrupt world of sexual exploitation, harassment, and cloak-and-dagger practices.

Author Michael Pronko writes this mystery convincingly. He has created realistic characters the reader will sympathize with, and some they will loathe. He puts the reader into each situation and transitions the scenes smoothly. Pronko also gradually reveals the true character of Onizuka, the victim. We, like Hiroshi, learn about Onizuka’s personality as each new aspect is discovered. Pronko’s dialogue is engaging and crisp. His characters’ words reveal what is necessary to develop the story, and keeps it moving along toward the inevitable climax. Like all great mysteries, Tokyo Zangyo has its twists and turns, as well as a few red herrings and surprising revelations. Pronko clearly and cleverly ties up all the loose ends in a way that feels satisfying and entertaining.

While the unique and exotic (at least to me) character names were interesting and gave the story an air of authenticity, I had difficultly pronouncing the character names in my mind, which pulled me from my suspension of disbelief. However, I was so captivated by the story I was able to fall back into the action, due to Pronko being a talented writer.

Tokyo Zangyo is yet another thrilling crime fiction story by prolific mystery writer Michael Pronko. With a believable cast of characters, an engrossing storyline, and superb writing, Pronko has delivered a hard-boiled whodunit any murder mystery fan will enjoy. Tokyo Zangyo is one of the best in the mystery genre.