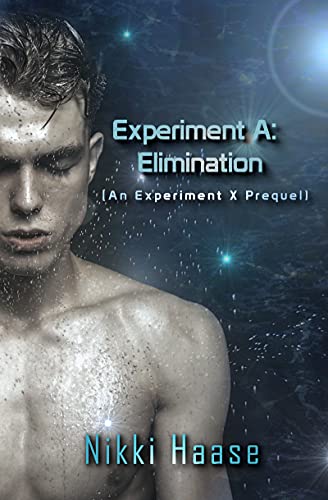 Experiment A: Elimination by Nikki Haase is a prequel to the Experiment X trilogy (Sacrifice, Exposed and Revolt). Set in a cryptic lab somewhere in the United States. The story starts with Jack Cortex, the protagonist losing Alexie, the woman he loves. What follows is a thrilling story of more loss and torture and a lot of action as the enthralling storyline follows the shenanigans of Cortex and his friends Ryan, Matt and Liam. Constantly fed the image of the cruel world outside the lab, the Subjects find it hard to separate truth from lies. One by one, the weakest of the Subjects are ‘eliminated’, all in the name of creating a perfect soldier to protect a country that they’ve never seen. At least that’s what the Lab Coats say to justify the unthinkable torture and the ruthless killing, all in the name of science.

This is a vivid and gritty dystopian novel that dives straight into the action. Even without wasting much time in describing the setting at no point is the reader clueless. Haase hits you with one event after the other, and you never know who you’re going to lose next. What I really loved about the book was the perfect mix of action, emotion, and storyline. The author doesn’t go deep into descriptions, and instead gives you just enough for your imagination to run wild while keeping focus on the characters, ensuring this is a character focused drama above all else.

I finished the book in just a few days; although admittedly I’ve been a long time fan of the author and couldn’t wait to get my hands on this book. But I can now say that long time finds of the series should be VERY excited about this novel. Even though this is a prequel the concept of a hidden lab separate from the rest of the world and meant to save it still feels fresh. The story is reminiscent of the Maze Runner trilogy, with its dystopian feel and subtle commentary on society.

Experiment A: Elimination has an engaging plot and relentless action. Since this book is a prequel to the trilogy, anyone who hasn’t read the trilogy can still enjoy the book. This is a rousing science fiction novel that provides plenty of fan service, but also provides a standalone story that is equally as riveting as the original series.