← The Betrayal Of The Inquisition
Experiment A: Elimination →

Sinners in the Hands of an Angry God 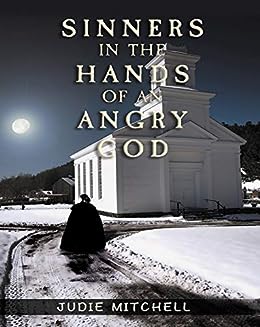 Sinners In the Hands of an Angry God by Judie Mitchell is a period drama set in the eighteenth century which follows the lives of families in a town in America. Through their journeys of self discovery and questioning the rules given to them by their elders, as well as beginning to contradict their original beliefs in their faith, the main characters such as Polly, Josiah, Hannah and Matthew, do all they can to protect themselves and their families from shame.

In a time when people were ruled by their religion, and committing what was seen as a sin was punishable, sometimes by death, as a reader you are given an insight into the struggles of young people living in such a community. Judie Mitchell has done an excellent job of showing the various avenues people could take at the time through the exploration of Hannah’s situation, to that of Polly’s predicament.

The overarching theme of the novel is that of religion and people beginning to question various teachings however, many other relevant and contemporary themes also arise throughout. There are many references made towards the unfair treatment of women at the time, for example Polly’s thought at the beginning of the story ‘Why couldn’t women disagree with their husbands?’ or later it is said “Why does the woman always have to suffer the worst punishment?” Both statements show the feminist views beginning to grow during that time.

Sinners In the Hands of an Angry God storyline and background stories of each character are very interesting and the way Judie Mitchell has written the narrative from various viewpoints is done extremely well. There are some controversial topics throughout, like the subject of rape which are handled in a good way and extremely relevant in today’s society. The use of metaphor could have been a little better as a way of hinting towards certain descriptions but overall, it was a very interesting read.

Sinners In the Hands of an Angry God is a riveting historical fiction novel with subtle but thought-provoking commentary on society. This is a fantastic novel for readers who enjoy compelling family drama in a historical setting.

← The Betrayal Of The Inquisition
Experiment A: Elimination →