← Sweet, Innocent, And Inspiring
The Saga of the Phoenix → 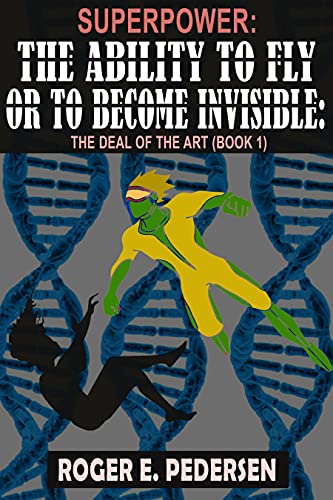 SuperPower: The Ability to Fly or to Become Invisible by Roger E. Pedersen, is about men and women who have the SuperPower of flight or invisibility. They hook up with Professor Steele and his associate, the FA-King, to pull off the world’s largest one-night heist of major art museums in New York City, London, and Paris. This is a thrilling setup that ensures readers will have plenty of action in store for them.

Author Roger Pedersen has created a compelling story with unique characters. Each chapter focuses on one character at a time. These chapters give the backstory for each character as well as which SuperPower they have. Most of the information helps the reader to better understand each character and allows the reader to connect with them. Even though the characters weren’t introduced in an organic way that fits in with the main idea of the story I wanted to keep reading to see where these characters ended up and what happened to them because I was fully invested in their character by the time I completed their dossier. The reader learns a lot about each character, providing plenty of depth to each character in a story that focuses on creating characters that are very detailed, making this somewhat of a character study type super hero book.. This makes sense, since most chapters begin with ‘Dossiers on’ such and such person. This gave me a Dungeons and Dragons feeling where players spend a lot of time building out detailed characters (or at least I did) so that they felt authentic and personal.

SuperPower: The Ability to Fly or to Become Invisible is an interesting story with a unique take on the super hero idea. This was a fun action adventure story that has a lot of potential to be a riveting series. Now that the characters are setup, I can’t wait to see more of them in future novels in this lively action series.

← Sweet, Innocent, And Inspiring
The Saga of the Phoenix →