SuperPower: The Ability to Fly or to Become Invisible by Roger E. Pedersen, is about men and women who have the SuperPower of flight or invisibility. They hook up with Professor Steele and his associate, the FA-King, to pull off the world’s largest one-night heist of major art museums in New York City, London, and Paris. This is a thrilling setup that ensures readers will have plenty of action in store for them.

Author Roger Pedersen has created a compelling story with unique characters. Each chapter focuses on one character at a time. These chapters give the backstory for each character as well as which SuperPower they have. Most of the information helps the reader to better understand each character and allows the reader to connect with them. Even though the characters weren’t introduced in an organic way that fits in with the main idea of the story I wanted to keep reading to see where these characters ended up and what happened to them because I was fully invested in their character by the time I completed their dossier. The reader learns a lot about each character, providing plenty of depth to each character in a story that focuses on creating characters that are very detailed, making this somewhat of a character study type super hero book.. This makes sense, since most chapters begin with ‘Dossiers on’ such and such person. This gave me a Dungeons and Dragons feeling where players spend a lot of time building out detailed characters (or at least I did) so that they felt authentic and personal.

SuperPower: The Ability to Fly or to Become Invisible is an interesting story with a unique take on the super hero idea. This was a fun action adventure story that has a lot of potential to be a riveting series. Now that the characters are setup, I can’t wait to see more of them in future novels in this lively action series. 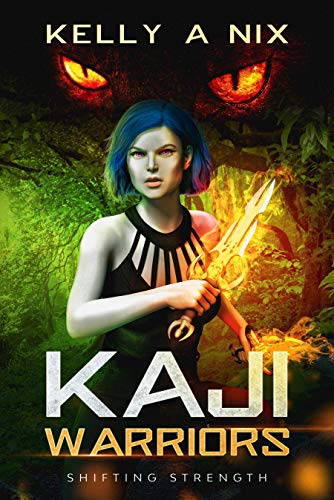 Kaji Warriors: Shifting Strength follows Atae, a hybrid Kaji half-breed, aiming to prove herself as a Kaji among a culture of strength and honor. Atae attends the elite Sula Academy full of hybrids like her and Kaji purebreds and they all need to test their strength in grand tournaments, but the purebreds have an advantage that hybrids do not; the ability to transform into savage battle beasts. Even with odds stacked against her and her packmates they won’t give up and they will fight even with the grave chance of death.

Kelly A Nix has done a fantastic job with her debut novel, successfully blending riveting elements of science-fiction and fantasy seamlessly. Kaji Warriors: Shifting Strength can start off rocky because you are subject to a lot of world-building and upfront foundation establishment. However, the different cultures, races, and relationships between them that was established here were very intriguing and delving into this later on in the story was, personally, one of the most captivating elements of the story.

The strong female protagonist, Atae, was meticulously developed which results in a solid character brilliantly written. She is headstrong, prideful, and more determined than absolutely anyone. As with every great character, she is not perfect either, she needs to overcome many obstacles and, often times, they can’t be defeated through physical strength. Other characters are also well-written, like the hard-working, intelligent Jeqi and, my personal favorite, Jent, a unique hybrid that even Atae finds unusual.

Kelly A Nix also does not hold back in writing tough and chaotic battles with multiple moves and brutal results which adds a lot to the intensity of the action. There are many intense scenes that is written with a fun prose and consistently grips you into the story effortlessly. The attention to detail is admirable and helped to fully immerse me into the eyes of Atae and the world of Planet Kaji.

As with every novel out there, Kaji Warriors: Shifting Strength is not for everyone but it targets its audience very well and there is not a lot of criticisms that we have towards it. This is an impressive first novel and I am looking forward to seeing the next installment of this series and future works of Kelly A Nix.

The Pursuit of the Pankera

I have read many sci-fi books but nothing stands out as a unique continuation of a story quite like the The Pursuit of the Pankera. This book is an unparalleled science fiction thrill ride that is crafted to entertain the reader. Most authors write about parallel universes as an idea to begin a plot, but parallel universes are a part of the plot here and Robert Heinlein explores the idea vividly. He first wrote about a parallel universe and then went ahead and wrote a parallel version of the parallel universe story he had introduced to his readers. Which makes sense, I suppose, as this is exactly what the parallel worlds theory would suggest. Heinlein is able to imbue a feel of classic science fiction, propelled by action scenes, which the genre has righteously deemed ‘Heinlein-esque’. The feel of deep science fiction with thought-provoking theories and hard hitting action is on brilliant display here. Everything that made me a hardcore Heinlein fan so many years ago has resurfaced here.

The book was written in 1977 but published in 2020. The author wrote two parallel novels about parallel universe but released one in 1980. The two books share the same start but they diverge and the characters are transported to two different parallel universes. The Pursuit of the Pankera is a bold literary experiment and the results are astonishing.

Hardcore science fiction fans may rejoice, but all others must not fear, I found this book to be easily digestible considering the scientific ideas utilized throughout the book. A few bits of jargon, but I found them to be good mood setters. This is still a human story that builds up and tests some fascinating characters. A suspenseful and thought-provoking classic science fiction story that will delight anyone looking for a gripping space adventure.