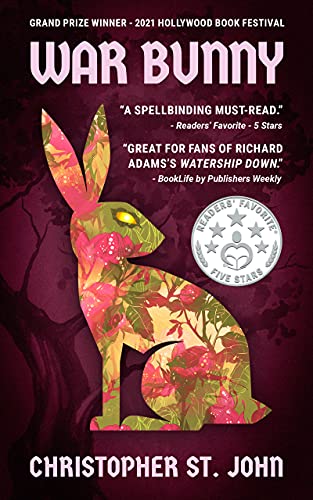 War Bunny is a riveting post-apocalyptic tale with a wonderful twist that I thoroughly enjoyed. Humans have been consigned to history, and the land has returned to a lush world where sweet herbs grow by the side of rivers and the lives of animals provide the drama. In the world of the rabbits, the predators are the Blessed while a rabbit is doomed to live “only until it is needed” as a meal. They are taught to welcome dying as the natural order of things, and they’re held in such low esteem by the wolves and foxes who hunt them, that they call them “lunch meat”. Anastasia is a rabbit who cannot follow the rules, and she is cast out of her burrow for not conforming.  She also questions the rabbits’ preordained destiny as food for predators.

Author Christopher St. John has created a uniquely imaginative post-apocalyptic story while also providing some subtle but poignant commentary on society. The story is creative and droll at times which helps to break up what could have been an overly dark novel. One way he does so is through the clever use of character names. Regardless of their species, the characters all have names in a variety of styles, from the elegant Anastasia and Nicodemus to the goofy Love Bug and Bricabrac. With humor, he draws attention to his use of names when Bricabrac, the craftrat, introduces himself to a mouse called Death Rage. “O, that’s nice,” he says, without irony. “Very feminine.”

Besides this, the story paints a picture of a bunny world that is much more gory and violent than you might expect for rabbits. For example, where you might expect a warren to be called something like Cowslip, as in Watership Down, in War Bunny the home warren is called Bloody Thorn. The very name War Bunny sounds like a contradiction of terms and I love how that seeming contradiction is used throughout the book.

The ending was satisfying and I enjoyed the journey. War Bunny is a fantastic post-apocalyptic adventure novel that provides readers with an offbeat but ingenious story that will stay with them long after they’ve put the novel down.