The Return of the NY Villains for Justice 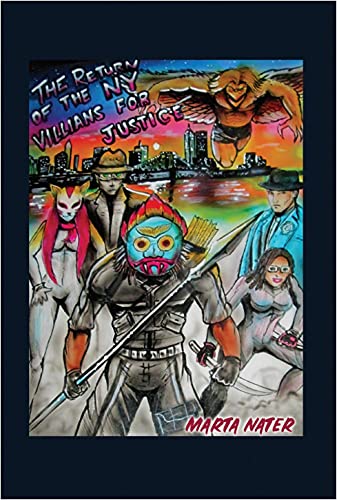 The Return of the NY Villains for Justice is Marta Nater’s second book of the Villains for Justice series. The story is centered around the villains that were introduced in the first book and the social causes each of them were fighting for. Nina Dansk returns to punish predators and sexual abusers alongside Cora Rollins. Jerico Raven and Danny Rojas team up to help the security forces fight crime and corruption. Shadow Claw on the other hand, the most powerful of all, finds out a secret about his family that will make him want to remain neutral amidst the turmoil that starts to rise in the streets of New York, but it is a neutrality that will be challenged as he starts to feel the safety of his family and friends threatened. Furthermore, inspired by the older villains, a new villain, Amadou, appears in New York with the main goal of bringing an end to the constant racism and discrimination that certain races were experiencing in society, and combating the police brutality that brought an unjustified destructive force upon them.

The villains inevitably team up, which was fun to see, considering the first book only told their stories separately. Many of these villains end up confronting one another, since they disapproved of the way in which some of them were punishing criminals, which brought some interesting interactions to the story. Despite the hatred that some of these villains had for other villains, friendships are made and a group of vengeful vigilantes is formed. Wanted by the police and security forces of various countries, while also being loved and supported by the public, these villains carry their mission of taking justice into their own hands, escaping the law and fighting the most vicious criminals.

The story is highly entertaining. Even though they are trying to bring some level of justice to society and mostly punish the most horrible criminals, they use some violent tactics to achieve their goals, which at the same time stands in their way and doesn’t allow them to get the support that they need from the police force. However, one can’t help but cheer for them despite these flaws. Throughout the story, one can see how some of them even get to change their ways and soften up a bit, trying to find a good balance in the manner they carry out their plans. The story also has some important things to portray about the current state of the legal system, a system that often allows the criminals to get away with their crimes while the victims are left unprotected, which is something that demands some reflection.

The characters are intriguing and it’s interesting following their thought processes and motives, they definitely have some conflicting views about the world. The story is gripping and full of action: the villains are constantly moving around, running away from the police and fighting criminals, so it’s impossible to get bored while reading what each of them are up to. The writing needs a little more editing to improve some aspects of it, but nevertheless the plot is interesting enough to keep the readers glued to the page, eager to find out how the adventure of these New York villains will end. The Return of the NY Villains for Justice is an entertaining story full of fun scenes that will make you wonder, through its social commentary, what you would stand for if such villains were on the loose in your area.