← I Will Never Forget That Day
Escaping Home →

On the Winds of Quasars 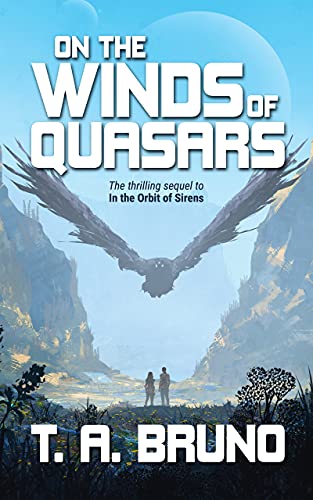 On the Winds of Quasars by T.A. Bruno is the action-packed sequel to In the Orbit of Sirens. In the land of Kamaria, the Sol System has been taken by terrifying mechanisms referred to as the Undriel. Among this unrest, humanity was sucked into the colonized power of these machines, and survivors fled on a life craft dubbed Telemachus. As they traveled through time and space to seek a new world, they founded Kamaria, and established the colony of Odysseus. They settled into their new home and found themselves facing disease, peril, and the threat of a dangerous creature named the Siren.

Twenty-six years later, we’re thrust into the middle of intense action as the story begins, in the aftermath of the destructive rampage led by the Siren. Now we’re following a man named Cade Castus living aboard a spaceship called the Maulwurf. The events of In the Orbit of Sirens are far in the past now, and we watch as Cade lives out his familiar life on the craft. As he gets work on a new ship, Infinite Aria, we see the potential of his world unfolding in front of him.

I loved the rich lore created in this story. Characters from In the Orbit of Sirens reemerge, hardened by the world, and it was such a fun experience to see how they were incorporated into this new timeline. I really enjoyed reading from the different perspectives of characters: Cade, Denton, and L’Arn were all fascinating points of view to see through.

While the world constructed in On the Winds of Quasars is absolutely fascinating, it can be confusing to keep track of with so many new terms and character name. I think this emphasizes the need to read In the Orbit of Sirens first with great attention paid to the character dynamics and family names.

On the Winds of Quasars by T.A. Bruno is full of action and intense moments that will have your heart in your throat. The entire book is full of rich character relationships and tense battles with creatures that feel entirely new and creative. If you’re looking for a story revolving around a whirlwind sci-fi world, this epic is perfect for you.

← I Will Never Forget That Day
Escaping Home →