Stuck That Way and Other Quandaries 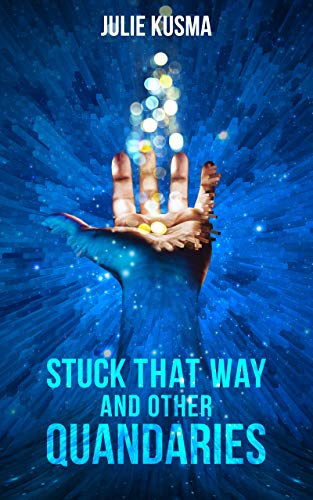 Stuck That Way and Other Quandaries by Julie Kusma is a collection of short stories that are delightfully unnerving. Ranging topics like beastly transformations, death curses, and demon hunters are all masterfully crafted to create raw emotion. Quick warming: These stories do have violent and disturbing scenes that I don’t think are appropriate for children.

My favorite story of the bunch is probably “By Induction”, a story about a woman who fully believes that she can curse people to their deaths by putting their name in a jar and putting that jar in her freezer. When her curse strikes again, she has a change of heart and decides to curse another. No spoilers, but it is a great short story.

Another great one is the titular story, “Stuck That Way.” A father is showing his young boy how to create a corporeal form in parts, but the mother warns against it, because she does not want him to become trapped inside a body and disappear from their plane of existence. It’s quick, unsettling, and a commentary on human life. Fantastic work.

The writing is very strong overall, and Kusma does well to develop setting and motivation for her characters before twisting the reader’s expectations and toying with the seemingly inevitable ends. She also does well by making the characters think and act very logically. It’s pretty easy to understand why the characters make their choices, even if the results are not positive. If there was a weakness in the writing, I would say that the rare moments of action are sometimes not clearly described, but these clear up quickly and efficiently.

I’ll be looking forward to more work from Kusma, and I hope that the next set of stories are just as chilling and unsettling.