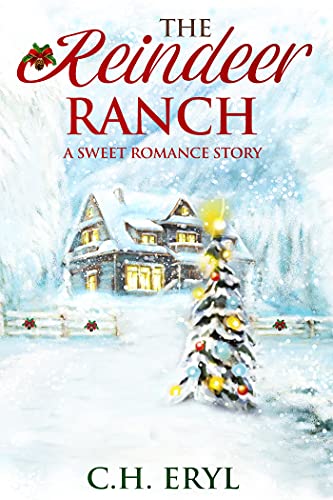 With its setting in Hope Falls, New York, C.H. Eryl’s romantic fiction novel The Reindeer Ranch is a simple tale revolving around two people who possess no hope of meeting a significant other given the failure of recent relationships. Darci Grisbane, a recently divorced mother of two, gets a flat tire in the middle of an unfortunate day, adding to her bad luck. It’s only later that she realizes the glimmer in that gloomy day when she meets Brian, her neighbor’s brother. As their convergence draws nearer amid the Christmas events and festivities, the two find themselves hindered by the shackles of their past. This is an emotional story about their endeavor to overcome their past and form a relationship.

Christmas celebrations are full of festivities and we get to see all of that in this romance novel and it adds a fairy-tale element to the story. The major reason why I enjoyed this book so much was because of the straightforward love story. The story is told simply, and because of that I looked forward to picking up this book again and again.

I was enchanted by the descriptions of Christmas gatherings and the jubilant events surrounding them. For instance, the reindeer rides with snowflakes drifting overhead fancied me and delighted my senses.

While I enjoyed the story overall, I felt that the ending left a some things unresolved. Though we get a seemingly happy ending, I felt that struggles still seem to loom over the couple as the dark elements of their pasts still linger over them, if temporarily absent. But I suppose this is a better reflection of life and how things don’t really end, but instead move on to the next chapter.

The plot of the story slowly develops as the novel progress, but the romantic feelings between the characters develop quickly. They both have failed relationships, and the characters and their relationship is intriguing, if not relatable. I would have loved to have delved deeper into their thoughts and emotions because I found them and their past to be so fascinating.

The Reindeer Ranch illustrates the apprehension some people have after divorce, and also shows the glimmer of hope we find in new love. While this is an impassioned novel I also enjoyed the comical touches of parenting throughout the story, as seen in Darci’s parents.

The Reindeer Ranch is an enjoyable and sweet read. This is a fantastic romance novel if you are looking for a quick light-hearted read that is filled with festivity, hope, and kindness.