The Futility of Vengeance

The Futility of Vengeance is the second book in the Many Worlds series which follows Gary Jackson through a multitude of realities. If you’re unfamiliar with the series, the key things that you need to know are that the Many World series is a science fiction/crime series that follows protagonist Gary Jackson through alternate realities. The series second installation, Futility of Vengeance picks up right where Wordlines left off. In one world, Sinead and Gary Jackson are about to become husband and wife, where alternately they are simply friends, and there is another Gary who sits in prison planning revenge on the Gary that killed his girlfriend.  Additionally, as Gary explores these Worldlines, he aims to explore more worldlines as we see his obsessiveness continue to grow throughout the book.

Like the first book, the use of alternate realities is an entertaining plot device that can be enjoyed by a variety of readers, myself included. However, compared to Worldlines, Futility of Vengeance explains the science fiction elements better and we go deeper. For example, we can visit the future of one Gary and then the past of a different Gary. Expanding beyond real time, there is a lot more we get to see in the second novel which I enjoyed immensely. While I liked the idea of additional Worldlines I felt that they were sometimes hard to follow.

The supporting cast of characters continue to be interesting, Gary Jackson’s character goes through a drastic change. In the first book, I found myself rather sympathetic towards Gary, but in this book he’s less likable. This could likely be attributed to the events that are taking place, as I felt that the way he treats the people in his life in Futility of Vengeance can be cruel at times. This gives a different dimension to his character that I was not expecting. Author Adam Guest continues to expand his creative sci-fi world in the second installment so that it is even deeper and more complex, and will appeal to hard science fiction fans.

The Futility of Vengeance has a story that is fascinating and takes readers in unexpected but entertaining directions. The story has a lot of substance, with a storyline that is intellectually invigorating. This is a story that has the potential to be massive in scope. Fans will be thrilled to continue the Many Worlds series and see the story go in some very intriguing directions.

Worldlines: A “Many Worlds” Novel 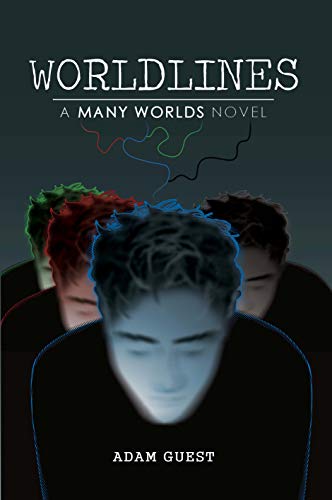 Adam Guest’s Worldlines: A Many Worlds Novel invites the reader to consider the idea of the multiverse and the consequences of actions that take place across multiple timelines. This science-fiction novel stars Gary Jackson who is passionate about the Many Worlds theory and exploring these parallel universes. However, things quickly go awry as Gary gets caught up with crimes committed by alternate versions of himself through lucid dreaming. The results of all these mechanics is a thrilling sci-fi novel that raises some big questions for its readers.

Although this novel focuses on a somewhat complex scientific plot device Guest has written a novel that is accessible and enjoyable for a variety of readers. I found the theories that contributed to the plot highly entertaining. Another way that Guest provides an ease of access for its readers is by providing a color association for each timeline. Considering this simple but effective method, I found myself getting lost in all of the twists and turns Guest was creating in these worlds. All of the versions of Gary Jackson’s struggles were slowly becoming struggles I experienced alongside them.

As a crime story fanatic, combining science-fiction and criminal activity was extremely fun to read. Dealing with parallel universes that contain multiple versions of yourself is one thing, but when those versions are committing crimes on your behalf, there is a new added sense of depth and urgency. Ultimately, it raises the question of what separates the unconscious and the conscious, and are our dreams just an extension of a different reality?

The anchor throughout the novel is the role of friendship and relationships. I genuinely enjoyed the role of Sinead and Michelle. I also enjoyed their stableness presented throughout the novel despite whatever version of Gary Jackson was in control of the plot. Both Sinead and Michelle are likeable, and they are good friends despite the actions that Gary Jackson takes, which leads into another big theme in the novel. As the reader experiences these alternate versions of Jackson, they are invited to think about having the choice to decide who we are despite all of the events that happen. This was by far the most interesting aspect of the novel. Although Gary’s life takes drastic turns, and the course of events have changed him, he ultimately is in the driver’s seat of who he is, which I believe is reflected in his friends.

By creating a story that is rich with intriguing questions and uses a unique plot device the book is the most unique read for me this year. The world building, plot mechanics, and characters were bursting with life. I felt as if this was a story with recognizable people experiencing unreal problems.

Although Worldlines ends abruptly without answering many of the novel’s big questions, I am eager to read more from the series. I think given more time to ponder the big questions that Guest presents in Worldlines, readers will have an excellent series that will leave them pondering the possibility of alternate realities. Worldlines is a visionary science fiction novel with an intriguing storyline and engaging characters.