All The World’s Colors 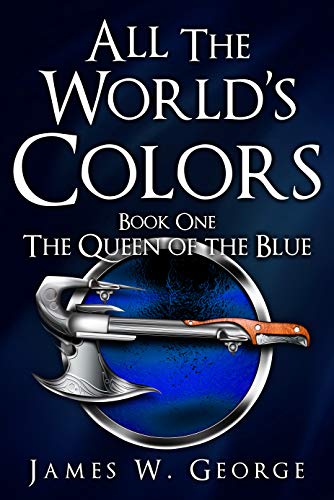 In his latest novel All The World’s Colors: The Queen of the Blue, James W. George deep dives into a fantastic world of magic and ancient feud. Our story opens as Jarrow Moncrief, mighty navigator of the Kelian, leads an expedition to recover missing colonists who had failed to report back to the homeland after supposedly founding a settlement in New Kelia. Joined by a company of soldiers the men venture off to the new and mysterious world in search of their missing brothers but upon their arrival make a gruesome discovery. Meanwhile, all is not well in the capital of Merovia. The aging Queen Makenna is displeased with the recent casualties and her grandson Prince Marcel finds himself the unwanted male child while his elder sister is beloved as the second in line to the throne.

Fantasy is one of my most favorite literary genres,there is so much to work with and it has limitless possibilities. This novel had many interesting and engaging aspects to it but it can be a little hard to follow due to the amount of information given at one time. Personally, I enjoy fantasy more when it has a multitude of fictional characteristics and rules concerning the fantasy world, and much of this piece had scores of connected and sensible aspects that tied the story together and brought the plot to life. The world and its inner workings were established firmly and it maintained consistency throughout the entirety of the story without large amounts of unnecessary repetition. All of the established parts complemented each other nicely and fit the theme throughout the entire story.   However, I found myself a little lost in the first couple chapters as information is presented very quickly without a lot of explanation in the beginning. Once you get into the meat of the plot it is a very engaging story with an interesting line up of characters and themes. In my opinion this novel presents a marvelous fantasy aspect that we do not get to see often in the literary world these days, I enjoyed the tone and the themes presented in this piece as well as an active plot with an abundance of excitement. Overall, this is a thrilling novel that fantasy fans will surely enjoy.