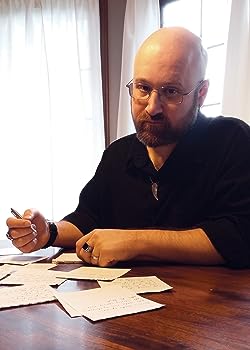 Liefdom is centered around the conflicted and hyper violent fairy, Gentry Mandrake. What was your inspiration for Gentry’s character and how did you craft his outlook on life?

Mandrake was an experiment, actually. I wanted to see if I could create a fairy that a man could get behind, a fairy that could get a man’s attention. My original inspiration came from a very lopsided movie night. I watched A Midsummer Night’s Dream and directly after that Die Hard 3. It was a weird night. With both of these sources rattling around in my head, I thought about the idea of a John McClane fairy and my mind kinda blew up. When I started writing the book though, I found my main character taking on a different persona. I lived a very dark childhood in a rough neighborhood and a violent school. Violence was a part of my life and I was kind of a bruiser because of it. When I married, I found myself in the midst of a very peaceful family that was nurturing and loving. At first, it was a bad fit. I didn’t know how to exist in a family structured like that. Gentry Mandrake helped me find balance. His journey taught me that peace was attainable and coexistence with healthy people was possible.

Magic, and its use, is a tricky thing to get right in a fantasy novel. How did you balance magic and its use throughout the story to keep it believable (as much as magic can be)?

Magic is a fix-all in a lot of fantasy I have read. If you have magic, or access to magical items, you can get by pretty well. I have found the trick to using magic is to realize it is a tool and nothing more. Magic is a gun or a knife. It can be used as a weapon, to be sure. It can be powerful and devastating. But in its truest form, it is a tool. I carry a knife with me everywhere I go. I open packages with it and cut string, and all of these things. It is not something I use for every occasion. It is not going to make me dangerous. It is a tool, nothing more. Magic in my world is very much like that. If a character gets into a fix, and can just wave magic at it, and boom, pop, they are out of their bind, magic is being used wrong. If they can use a spell or an item as a lever to move the situation, then the idea of magic is more, I guess we will say, believable. The trick is to make the magic as specific as possible. This spell can, for instance, open a portal to any place you can think of. That is a powerful spell for escape, which it was obviously made for. Maybe travel, great, but it has its limitations. But think out of the box a little and that spell becomes devastating. You can open a portal under an enemy which they can fall into. If the other end of that portal is a thousand feet in the air, no more enemy. You are being chased. Open the portal behind you in the path of your pursuer and have it open directly in front of a wall. No more pursuer. Magic should never be the answer. It should be a puzzle, a tool. How many things can you use a screwdriver for? How many can you use a portal for?

It feels like more than half the book is devoted to describing some form or feeling of pain. Was this the chosen theme of the novel or did this develop organically as you were writing?

Pain is the human condition. Pain, and our relationship to it, defines us. I have a friend that is in chronic pain. There are few greater heroes in the world than those in chronic pain. Others, like me, went through mental anguish as a child or adult. How we deal with pain says a lot about us. I never meant pain as a theme. This book was meant to be a discussion on the things that are worth fighting for. Pain is, however, a great way of talking about motivation, resilience, and our way of looking at life. I overheard a conversation my young sons were having about pain one day and I caught this. My oldest said to my youngest,

“You don’t know a thing about pain. You have never experienced real pain. I had a paper cut once. That is real pain.”

This told me a lot about my son’s life and his experiences thus far. By listening to that conversation, it can be said he has lived a pretty good life. His understanding of pain will change as he walks his path, but for now, I take solace in the fact that his life experiences have been clean of a lot of the things I had to suffer as a child. My conversation would have gone much differently for sure. I used pain in this book as a way of talking about the characters and how they handle their difficulties. Pain makes heroes and heroines out of us, or we become victims. That is my understanding, and that is what I would like my readers to take out of Liefdom.

There are some intriguing characters in the story. What was your favorite character to write for and why?

First, I am in love with my characters. They are a large part of why I do what I do. I have these people in my head who face unbeatable odds and fight worthwhile fights. They are worth knowing and have taught me a lot about life. They have helped me through dark times, and they have healed me when nothing else could have. I think the world needs the characters in my books. People are in pain, and they need heroes to look up to. This is why I write. That being said, let’s talk about Collette. Collette is a minor character at best. She is a friend to a main character named Trevonne. Collette sees her friend suffering and she can’t stand by and let it happen. She will not let Trevonne face this terror that has entered her life alone. She provides a moral compass and a healing hand. She is also a pretty powerful force in and of herself. Collette reminds me of my wife. Shortly after we got together, I ended up in therapy to deal with my tumultuous childhood. We broke up and she became a friend. I had repressed memories of my past and was falling apart every day. Suicide was a constant companion and I was close, really close, to losing it all. Many great friends saw me through this part of my life, but none better than my wife. She was there every time I reached out, and many times when I couldn’t. She is the reason I am still alive. She was my Collette. Collette does something that other healing figures don’t do in real life or fiction. She doesn’t try to save her friend. She knows that is impossible. Instead she empowers her friend to fight for herself. And she stands side-by-side with Trevonne as she does it. Saying I have a favorite character is impossible, but Collette would be high on the list.

Is there another book in the works for this series? Can you tell us what will be next for Gentry Mandrake?

There are three Tales from Perilisc books: Liefdom, which I released in May of 2016, Chaste, which will be released in October of ’16 in time for Halloween, and The Bloody Diamond of Mestlven, which will come out in April or May of 2017. They all follow three characters and their travels. They are stand-alone books that do not need to be read in order or at the same time. These are really introduction books to the world and the way it works. They are all dark fantasy and all set in the same time period. When I wrote them, I wrote Chaste first. Chaste can be read first, but doesn’t have to be. I fell in love with the three main characters Trevonne, Sob, and Sai. This series shows what happens with those characters. Mandrake is a lot of fun, and I love the character, but he will not see print again for a while. He is a very minor character in one other book that I wrote. But for the most part, his time is done until I reach the second epoch of my work. My career will come in three acts. The first act is about another main character and everything is set up for him and his journey. There are side projects that spin off of his story, but he is the main focus. His theme is studied for the first epoch, and that will be 25 books long. I am working on book 19 of that act. The second act comes after that, and is about a great world war. That story is still in its infancy. I know very little about it, but I do know it will be 24 books long. After that comes the third act, which is the aftermath of that war. I know almost nothing about that, but what I do know is pretty exciting. For now, I’m done with Gentry Mandrake. But watch for Trevonne. She is a dark horse.

A zealous guardian in a peaceful city, Gentry Mandrake is a fairy unlike any other. Cast out and hated for his differences, his violent nature makes him wonder at the purity of his soul. He hunts for belonging while fighting to protect the human child bound to him. Explore the mythical realm of The Veil, the grating torture of the Sulfur Fields, and the biting tension between power and purpose in this wondrous struggle against a demonic wizard and his denizens. Can Mandrake overcome such terrible foes to defend those he loves?