Every character in Endless Incarnation Sorrows was distinct and well drawn. Were these based on flashbacks as well or were these creatively developed?

In a way, they were flashbacks to another time and place experienced during deep sleep. They were too descriptively vivid to simply ignore upon awakening. Which left me pondering: Do your past lives influence your present? I didn’t write this book to “convert” folk, but to leave a question Can past lives resurface in the present day and influence our daily propensities and practices because my vivid flashbacks took on a life of their own, arriving and departing on an otherworldly schedule.

What do you hope readers take away from your novel?

I would like readers to have open minds to the probability of: “Have we lived before?”

Are you working on any future books based on your experiences?

Yes, I have just finished my 7th book: “The Little Breadwinner” based the the “dirty” El Salvadoran civil war that was aided by the USA, and the CIA’s involvement … accused of “stealing” thousands of human rights statements after the war.

I was there in El Salvador as a journalist during the war and interviewed several people, but a leftist rebel, a feisty little dwarf who had the courage of a lion grabbed my attention. This is her story and others who were assassinated by the National Guard’s death squads.

A saga chronicling insights from past lives that resurfacein the present day and impact prevailing patterns.

Based on true events: After the hospital staff resuscitated author Lucia Mann forthe third time following a third surgery, she began to perceive and recognizea string of intimate memories of people and places from long ago. Although shewas unable to control the arrival of these vivid flashbacks, she recognized theirconnection to her current life. Often paralyzed with fear from echoes and visionsof the past, Lucia eventually took pen to paper to make her peace with yesteryear.

As Lucia Mann constructs spellbinding memorials to past times, she threadscertain themes throughout, such as the imprinted physical marks that symbolizedunsanctioned deeds dating back to the author’s first imprint on Earth, and a loveso deep and full that it survived captivity, depravity, and more until it eventuallyachieved perfect purity.

Mann’s tale is told through a panoply of fascinating characters:

This multigenerational tale will trigger you to ponder the elements of your lifethat you are puzzled by or take for granted. Is there an ancient explanation to acertain act, or characteristic, or mark? Mann invites you to contemplate the conceptof reincarnation and to consider how it may be affecting your own epic journey. 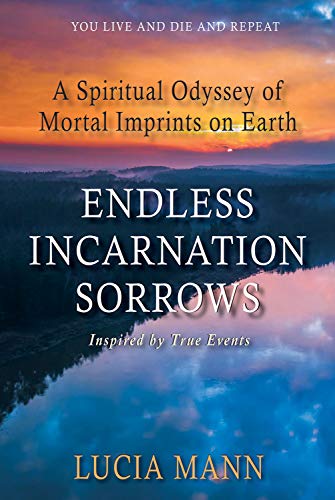 Endless Incarnation Sorrows: A Spiritual Odyssey of Mortal Imprints on Earth is inspired by a true story. The reader gets to experience life through riveting main characters whose distinct roles are revealed one by one. Lala, daughter of Rebekah bas Sora, and Hassam, son of Mohammed el-Din, gets to, unfortunately, undergo suffering due to the sins committed by her mother. Lyveva, a lovable character who enjoyed good relationships, battles abductors, arises victorious and gets to be recognized as a solid healer. The other main character was Lucja, who I was easily able to empathize with. The story of Lucja is mostly told from an enclosed Auschwitz. This place smells of slavery and dissoluteness. Every character was distinct and allowed me to view the story from different angles.

The story is narrated throughout different years and I like how well-defined life was for each of the generations, and how the reader can easily notice the differences. Lala was an unlucky character. Her birth was considered ill-fated since Rebekah, her mother had an atrocious union. It is such a disgrace that some women in the book had to suffer for things that were considered sins. Lala was born in the deserts of Judea and experiences some extreme struggles. Through the lives of such women, the author shows us how unfair life can be and how women endure affliction just to exist. The stories about the women are melancholic and somber, but their resilience inspires hope.

The author narrates every historical tale with ease, giving credence to the impression of a true story. Lucia Mann’s style of description is fluid and rich and engages the reader throughout the narration. Lucy Mann is able to make the reader pause and reflect with some dramatic and emotional turn of events. She takes you through extreme experiences and makes one understand that life can be complex sometimes. I loved reading the thought-provoking parts of the book as they helped me view life as it is in a different cultures. Reincarnation is a major topic in the book, and the exploration will make you question life as it is and the purpose of living.

Endless Incarnation Sorrows: A Spiritual Odyssey of Mortal Imprints on Earth is an excellent book for readers that love engaging literature possessing depth and intelligence. The conversations in the book are fresh, the lessons immense, and we see how women can be superhuman.