Solomon’s Porch follows a man who suffers from a tragic accident that leaves him in a coma with nothing but flashbacks to keep him going. What was the inspiration for the setup to your story?

At my father-in-law’s funeral, we spent hours listening to people describe individual acts of kindness that he did in private for most of his life. He probably never realized what a difference he made. Solomon didn’t know either, so I thought it would be interesting for those he reached out to over the years to be the ones who came back to rescue him.

Solomon Thomas is an intriguing character. What were some driving ideals behind your character’s development?

He comes from such tragedy, but at the time, didn’t know how to lean on others. Once he lost it all, he no longer lived in fear and had only himself to give. Turns out, that was more than enough to breathe new life into his beloved town of Ginger Ridge.

Redemption, connection, community. We get so lost in our own brokenness that we forget to let others in. We’re all doing the best we can, but we don’t have to do it alone.

A series of children’s stories called Character is a Choice. It’s a series of read-aloud, participation books that help children learn to make the best choices. The first one, due in spring ’22, is called Do Your Best, Tess!

After that, there will have to be a sequel to Solomon. The town of Ginger Ridge deserves to know what happens next, and there’s so many places it can go from here. Both in the past as well as the future. There are many stories waiting to be explored. 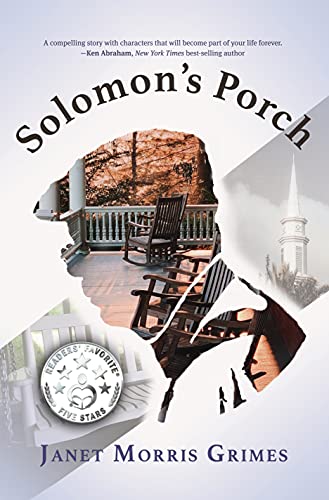 While this is not your typical love story, there is certainly a lot of love to go around between the characters in Solomon’s Porch by Janet Morris Grimes. Speaking of love, Grimes has a way of writing that leaves you feeling emotionally connected with each and every character-rooting for all of them despite their wrongdoings or shortcomings. We follow the characters through the aftermath of a traumatic event that weaves together the lives of people who didn’t know they needed each other, all connected through one beloved man from Ginger Ridge, Georgia- Solomon Thomas.

We meet the dramatis personae one by one, learning their story and that each is feeling the pressure of precious time-and a looming suspicion that they are running out of it. There is Raphael Henry- a Mexican immigrant who is suddenly facing deportation and attempting to prepare his young and growing family for a future without him. His run-in with Solomon creates even more chaos for him, and leads Solomon back into the life of single mom Harper Phillips. Unbeknownst to her at first, Harper was close to Solomon during her troubled childhood and is immediately drawn to helping him. With that task, she is surely not alone. Among many, there is newly single dad Brock Timberland, a soldier turned Pastor, who is trying to find his new way in life while restoring the faith in the Ginger Ridge community. Investigating the event is Detective Cameron Sterling-who despite his lackluster and burnt-out attitude, finds much-needed inspiration and a renewed sense of purpose through this particular case. All of their lives begin to intertwine in unexpected and interesting ways, leaving the reader in a dreamy state of surprise and suspense.

I could not have loved this book more. It was my favorite kind- one that you don’t want to end, already missing the characters you have come to love long before you’ve even finished. I would absolutely recommend it to every reader who loves a good heartfelt story. The  lessons of overcoming trauma, abandonment and grief, living with empathy and kindness, and putting yourself in other people’s shoes run deep throughout the narrative. It is near impossible not to resonate with the struggles that are faced and to find hope and reason in seemingly unanswered prayers.

My favorite quote and greatest takeaway from Solomon’s Porch was from Solly himself: “You can only use the past to change the future, find a way to pay it forward.” Watching this lesson be brought to life over and over in this compelling story of human compassion will inspire any reader to live in alignment with these words of wisdom, releasing the chains of regret and focusing on the beauty in the hope of what is to come.