Jam Sessions: Sometimes in Middle School, the best you can do is survive 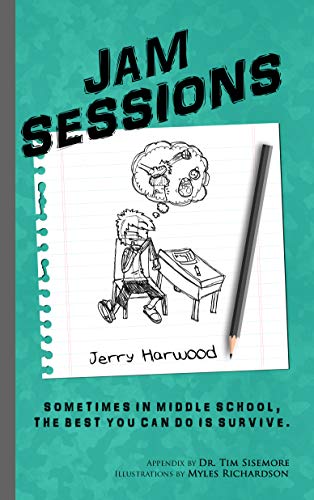 Jam Sessions follows a middle school boy named Phillip who has to forge a new path for himself through a new school that he’s transferred to in the middle of the school year. Phillip struggles with bullies, but finds a creative outlet in Mr. Filter’s class where he starts the day with a writing prompt that sends Phillips imagination soaring. Now, if only he could apply that creativity and passion in his real life.

Jerry Harwood has created a cast of characters that are both easy to dislike and easy to empathize with. Chuck and his friends are easily unlikable and I loved Ashley, Daniel and Jaylan. I really liked all the teachers too, especially the language arts and P.E. teachers. I did feel like Phillips mom should have played a bigger part in the story, but it didn’t hurt the story in any way. From the first time we meet Chuck I thought that he was just a pain in the butt kid who likes to be a bully and embarrass people. Chuck and his gang of hooligans didn’t really evolve much but that honestly worked for the story because they continue to be the fundamental antagonists.

Jerry Harwood does a great job detailing what a panic/anxiety attack feels like, I could almost feel and see Phillip having his attacks. It was great that he found a way to cope with his attacks. Even at the beginning when the author is describing Phillip and his mom running away from home, everything is perfectly detailed. When Phillip is standing in the back of the room on the first day of school, you could feel him praying that he is invisible and then realizing that he really had been during that class because not one person had cared about him being there or noticed his presence. It was sort of sad.

The story flowed easily and was well written. I enjoyed the small cartoon characters at the beginning of each chapter and I liked how short the chapters were. I read the book in one sitting, because it was an enjoyable read and I loved that Phillip was able to turn things around which gave the book a feel good ending.