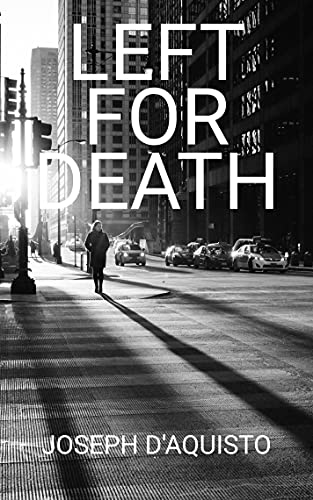 Left for Death: A Noir Detective Novella by Joseph D’Aquisto is a compelling crime fiction novella told from the perspective of Detective John Sandes. He details the riveting series of events that lead up to a gruesome crime, which happens right before he retired from the Seattle Police Department. It all started when he’d found a dead body at a crime scene and discovered a shocking connection to a little girl’s disappearance from a year ago. What soon followed was a tangled web of deception that led to a child trafficking ring and police corruption in his own department.

D’Aquisto knows how to tell a gripping crime tale with fast-paced action and lots of drama that colors every page. The events of the story are rich with intricate details of real-life ripped-from-the-headlines stories, like an episode from the television show Law & Order.

What I enjoyed about this crime mystery is that we get to learn about Detective Sandes’ life as well. He’s a veteran that reflects on his past mistakes while grappling with his physical and mental health. This makes Sandes both grounded and relatable, but still a very intriguing character.

The novella creates some vivid imagery of the locations and setting for the story which really brings to life Seattle and New York City and allows the characters to inhabit these spaces and makes the scene a part of the story rather than just the background. The story is very detailed as well, giving readers a great visual of the crime scene, the evidence, and the wild goose chase we’re taken on that goes in some unexpected directions, all the while relying on the skills of Detective Sandes to reveal the mystery to the reader.

While I enjoyed the mystery at the heart of this story, and the methodical unraveling of that mystery, I felt that the momentum of the story is sometimes slowed by a wealth of backstory and various moments where we’re told things rather than shown things. John Sandes is an interesting character and I think getting more of the story from his point of view would have been fascinating.

Left for Death is a gripping crime novel which summons the best elements of the noir genre that puts a stirring character in the midst of an enthralling mystery with thought-provoking repercussions.