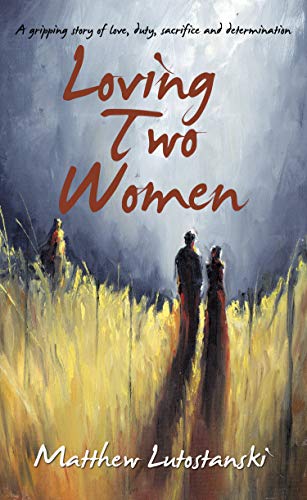 Loving Two Women By Matthew Lutostanski is a captivating story of love passion, and tragedy. Tadeusz thought he had lost his first love Ella during the Holocaust. Having moved on and building a new life with his wife Maria, decades later he finds out Ella is still alive. Will he be able to choose between his past love and his present love?

This alluring story is a perfect blend of romance and historical fiction. The memories that Tasdeusz, Ella, and Maria carry with them are heart wrenching and tragic. The author has written a fascinating story that brings in the drama of Tasdeusz, his two loves and the history of the holocaust. Lutostanski has done his research and it showed in each scene portraying the indescribable suffering people went through during the Holocaust. Beautifully written with vivid imagery and such detail that you feel like you are in the story.

I was invested in each character and their backstory but more so I was anxious to read more about the war. I can see this being made into a movie, the kind which the world needs right now  because of the pure true love and the chance to say all the words you wanted to say that most  people never get the chance too. Loving Two Women a romantic thriller that uses its true story roots to tell a fantastic historical romance story.

Loving Two Women is a historical romance novel set in post-World War II about a man, Tadeusz, receiving a letter from his ex-fiancé from 40 years before who thought the Tadeusz passed away in the war.

Loving Two Women starts off very strong with the first chapter having the protagonist receive the first letter from his past lover, Ella, which is where the reader understands the basic premise of the novel, that is arguably one of the most intriguing aspects. Matthew Lutostanski, the author, stated that this is based off true facts and it is obvious that he put a lot of research into the setting and time as well which added a lot to the authenticity to the setting. Although I felt like there was one or two chapters where the setting was, albeit necessary for context, felt more like a summary of events and could’ve been written in a more interesting way. Fortunately, that only happened once or twice and the setting in the most of the novel was set up expertly, even down to the small details.

The three main characters, Tadeusz, Ella, and Maria, were expanded on enough for me to understand how they felt or would feel from the actions of others. We delve deep into Tadeusz’s inner conflict between the love of his current wife, Maria, and the love of his ex-fiancé. Lutostanski also successfully describes the emotions of the others characters at the same time. Personally, my favorite character was Maria. We only get a handful of chapters from her perspective but we come to understand her very much through her actions and Tadeusz’s view. We also receive a handful of chapters from Ella’s view and it is obvious from all perspectives that Lutostanski is more than competent in writing strong, female characters.

The plot of Loving Two Women is quite concise, there isn’t a lot of things happening at once, instead it follows one aspect deeply before moving onto the next. Personally, the best aspect of this novel was the prose, specifically, the switch between third-person past and first-person epistolary. Epistolary being the letters that Tadeusz and Ella send to each other was one of the parts that I found myself continuously looking forward to and enjoying. Each of these tended to last a while, and even a chapter long, which was thoroughly enjoyable.