An Adventure and a Revelation

Duplicity follows Toby as he meets a mysterious woman who unlocks a past that Toby has tried to bury. What was the inspiration for the setup to this intriguing story?

One day, as I was thinking about creating a career for a character in another book I am currently writing, I had a vision of a disheveled-looking young woman. She was walking along a deserted Australian outback road at twilight. I had no idea who she was, why she was there, how she got there or what would happen to her.

A few days later, thinking about this same image, I saw a man in a sports car come along and offer her a lift.

I decided to jot these snippets down and then let the writing take me and my characters wherever it would. The result is ‘Duplicity‘, my first novel.

Toby’s character is enthralling and well developed. What were some driving ideals behind his character development?

I am interested in how people develop over time, given the challenges that life imposes on all of us. I, therefore, found that I had written about two flawed characters whose emotional development had been arrested by previous events in their lives. Both protagonists needed to know themselves before they could develop into mature people.

Toby is a nice person but somewhat confused about his life and where it’s going. His challenge is to come to terms with his abandonment by his mother at a young age and the emotional hold that his father has exerted over him all his life.

I enjoyed the mystery at the heart of this story. Was this something you planned or did it develop organically while writing?

‘Duplicity‘ was originally meant to be a schoolgirl essay, in another novel. I soon discovered, however, that it had a life of its own and was hammering away at me demanding to be written so I put the other project aside until I had, I hope, done justice to it.

None of the events that take place in ‘Duplicity‘ were planned. I’m a ‘pantser’. I fly by the seat of my pants or the flow of my pen. So ‘Duplicity‘ developed organically as I wrote it.

One of the things I discovered through my writing, as no doubt many other writers before me have found, is the amazing capacity of the brain, to plan and organise future scenarios that I was unaware of at the time. I would find that some detail I had included in an earlier chapter, anticipated something I had just thought of.

This makes writing an adventure and a revelation, not just for the readers, but for the writer as well.

I am currently writing the novel that I temporarily abandoned for ‘Duplicity‘. I have provisionally named it ‘The Cave’, but that might change as the story develops.

In the ‘The Cave’, there’s a kidnapping, a disappearance, a murder and romance all bundled up in a coming-of-age plot. Set in Sydney, Australia and Bar Harbor in the USA, the new novel encompasses all the passions: anger; hatred; fear; competition and love, as two children, thrown together by circumstances that neither could anticipate or control, are forced to negotiate their way to adulthood and an acceptance of each other.

I am hoping this novel might be finished by the end of the year. 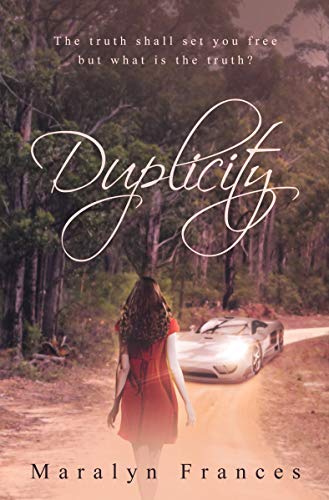 Duplicity by Maralyn Frances is a delightful mix of a novel that is a little bit mystery, a little bit romance, and a whole lot of fun. It is a charming amalgam, being both thoughtful as well as a little quirky and outrageous, in a good way. Frances succeeds in balancing serious topics such as guilt, physical and emotional abuse, and grief with the exciting and fast-paced romance of the main characters. My favorite part of Duplicity was its structure: I adored that the the first third of the novel is told from the perspective of protagonist Toby Wendell, the middle third recounts the same series of events but from another character’s perspective, and the concluding third brings the story together with a heartwarming and surprising close. While the turn of events of Duplicity may, at the surface level, appear almost impossible to readers stuck in reality, it is an engrossing read to escape the drudgery of everyday life and it will charm readers with its full-hearted plot.

Duplicity centers on Toby Wendell, the up-and-coming executive of his father’s agricultural equipment company located in rural Australia. With Toby, Frances has created a handsome, well-read, and thoughtful lead star who is delightfully tasty to read about. Toby has the piercing eyes and the chiseled body, as well as a university-educated and well-traveled intellect, making him a triple-threat to the unsuspecting women of his small hometown. But, one evening, Toby happens across a forlorn beautiful, young woman on the side of the road, and his world is unexpectedly turned upside down. With Toby and the mystery woman, Frances crafts a unique relationship that builds in heat over the pages, tantalizing readers with its colorful and tempting language. And, just when you’re getting settled in with Toby’s story, Duplicity takes you back to the beginning to show you the story from a very different set of eyes. Personally, I loved being able to see the same series of events from two characters’ perspectives, and I enjoyed imagining how fun Duplicity would be to watch as a movie due to this unique structure.

One thing I particularly enjoyed about Duplicity was how Frances kept the plotline varied and moving quickly. It could be possible that reading the same story twice, effectively, could become dull with other authors, but Frances does a truly impeccable job of hiding “Easter eggs” throughout the middle third of the novel for readers to rediscover after having already read them.

Overall, Duplicity is a thoroughly enjoyable and unique book to read. The plot will surprise and delight; the romance scenes will fill readers with romance and excitement; and the characters will begin to feel like real-life friends. With Duplicity, Frances creates a world for readers to escape to and soak up the feelings of overcoming grief, coming to terms with guilt, and falling in love anew.