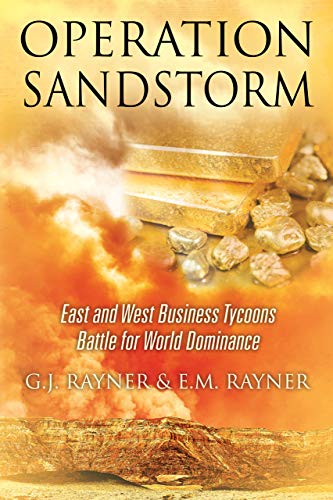 Operation Sandstorm by G.J Rayner & E.M Rayner is an action packed adventure that will have you hooked from the moment you start reading. The story follows Cyrus CEO and president of one of the largest tech companies in the world, Livingston Tec. An attack takes place on Livingston’s mines in Morocco and  a large number of Golden bricks have been stolen. A private security company Omicron has been tasked with retrieving the stolen gold. Livingston learns that Vladimir Shishani is the one that initiated the attack on his mines. Livingston also learns that Shishani is involved with terrorist groups. Will Livingston get his revenge and put a stop to Shishani?

G.J. and E.M. has done a fantastic job with creating compelling and authentic characters through meticulous development throughout the novel. Each character was unique in their own way and I was able to empathize with each one. Tension begins to rise as you get further into the book as characters become more suspicious and hesitant when they start to feel something is off. I was equally suspicious and tense as the deep character development really gets you invested in events. Revenge, betrayal, action, suspense, this book has it all. It was interesting to get a closer look at two different men, one genuine and the other malicious. Both men have access to unlimited amounts of money but they have two very different agendas.

While I enjoyed this novel overall, a few chapters felt slower than others, bogged down with exposition and details. But this did not deter me from continuing to read, I just wanted it to be summed up quicker to get back to the action. I highly recommend this absorbing action novel to anyone who is looking for an exciting read.