In A Destroyed World

Russian HellwayZ follows a group of people on their way back to Moscow and face a post-apocalyptic country ravaged by zombies. What was the inspiration for the setup to your story?

I’ve never been interested in zombies before but then I watched TV series “The Walking Dead”. It was a game changer for me. I was struck by the fact that the dramatic destinies of people were so harmoniously inscribed into the zombie apocalypse and intricately intertwined with each other in a destroyed world. So I decided to tell my story.

Your characters were intriguing and well developed. What were some driving ideals behind your character’s development?

The images of the characters are collective, but every one of them has a prototype that I have met at some point in my life. Biographies, criminal cases, events that happened to the heroes before the Apocalypse, were all taken from the real life stories. And, of course, the social environment that once surrounded those characters, descriptions of cities, villages, people’s lives in different layers of society, their behavior – this is all for real.

Any end of civilization is a rapid fall of humanity into the Dark Ages. For some this is a collapse of everything: the loss of status, money, the opportunity to live in comfort. Some are simply ready for an extreme change, and for others “the social elevator” would turn on which would never had the chance to do so in the ordinary world. And the most interesting thing is that all these people were brought together to one point in space and time. The question is: what will win at the end? Will it be their primitive animal nature, or their ability to conceive a new civilization for humanity?

You know, literary translation is very expensive, as is editing. I hope that “Russian HellwayZ” will start selling well and we can see the continuation as soon as next year 🙂 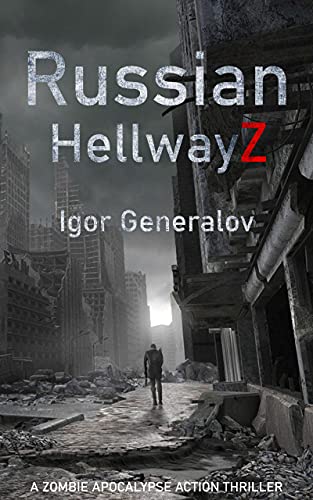 Russian HellwayZ by Igor Generalov follows the enthralling account of Misha Myakinin’s, aka Copper, trip to find his son Matvey while a zombie apocalypse is raging all around. On his voyage through post-apocalyptic Russia, he will find some allies as well as some foes, all while learning more and more about the unexpected epidemic that has destroyed the world.

Generalov writes in a very descriptive way, giving the book a thick atmosphere that provides a vivid view of the tragedy and destruction in the book. As a reader keen on details, I appreciated the amount of work put into the description of the characters and most importantly on their detailed backstories and connections. From Myakinin to all the people sharing their stories with the psychologist doctor Shrink, we get a deep insight into what they had been through ever since the apocalypse broke off. We get to explore the aftermath through various perspectives and each one provides us with a deeper understanding of the human toll of this apocalypse. Furthermore, the main character, Misha, feels relatable to the reader as he is not perfect but he is still very compelling.

This is a thrilling zombie apocalypse novel that made me think of the AMC show ‘The Walking Dead’, and there is an exciting connection revealed in the story. This is like ‘The Walking Dead’ but in Russia and carries that same level of human drama and intrigue as the show does. Fans of the show will enjoy this rousing fan fiction that tells an action filled story.

Russian HellwayZ is a suspenseful post-apocalyptic story with a dark ambiance and relatable characters that will appeal to readers looking for a gritty but fun story in a unique setting that feels exotic, at least to anyone outside of Russia. Fans of hard hitting zombie apocalypse fiction will have plenty to sink their teeth into.