The Glimpse follow a rising artist who becomes pregnant and is determined to be a good mother and a good artist while facing the harsh realities of a male dominated world. What was the inspiration for the setup to your story?

This book hit a number of curiosities. I’ve always been drawn to the Abstract Expressionist movement and wanted to delve into what this era was like for a woman artist. It was considered taboo to have a child if one wanted to be successful. Also, I was interested in exploring what happens to someone who is successful early in a movement, then disappears. What happened and why?

Liza Baker is an intriguing and well developed character. What were some driving ideals behind your character’s development?

I modeled Liza loosely on Joan Mitchell, my favorite painter from the Abstract Expressionist times. Like Joan, Liza is a very talented artist, fiercely devoted to her work. She also has a troubled relationship with her father whom she never could please. Mitchell’s biggest regret was that she never had a child. Liza did and she longed to be a good mother, even as she was desperate to re-establish her early success. Problems in pursuing both were inevitable.

Difficult mother/daughter relationships (as most are) and how hard it is for women artists working in a male dominated arena, especially if they choose to be mothers. Also the value of persistence and trusting one’s creative voice.

This next is quite different. It’s about a boy who survives a punitive childhood (adopted by Christian fundamentalists) by becoming one of the first Christian ventriloquists. I’m titling it Raised in Captivity. Won’t be out for a bit as I write around a full time job. 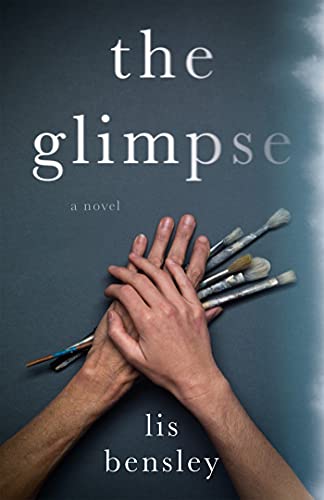 It has been a while since I have read a book as good as The Glimpse by Lis Bensley.

Although there are plenty of fiction books describing the life of an artist, there are very few that depict a chaotic life of an artist as fabulously as The Glimpse. Author Lis Bensley does an incredible job in transporting her readers into the art scene of New York in the 1950’s. The level of accuracy with which she describes the era is outstanding, In addition to involving famous abstractionists of the time into the plot, making them vivid and a vital part of it, Bensley manages to capture the free-spirited nature of the decade.

The book is filled with an admiration and passion for art, and this helps readers immerse themselves in the story, culture and the main character as well. But once Bensley is sure the reader is fully in Liza Baker’s headspace, she starts unravelling the deep and dark psychological issues and dilemmas that the protagonist is battling with. I admire how boldly Bensley describes depression and jealousy for the success of others. The reader is able to witness firsthand how Lisa Baker is trying extremely hard to combat her inner demons and how, sadly, demons win over her most of the time. I also love how masterfully Bensley juggles with time. The plot jumps back and forth between the 50s and 60s, and then towards the end it becomes paralleled, with Bensley providing two perspectives of the events that are happening. With all those shifts in time taking place, the plot itself remains clear and easy to follow.

The Glimpse is a riveting historical fiction novel that is clearly written with a passion for the arts and a keen understanding of human struggles which are explored in dramatic ways throughout the story.