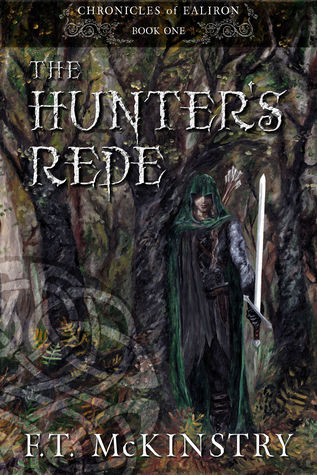 The Hunter’s Rede by F.T. McKinstry is a tale of adventure, mystery and deceit. Lorth is a hunter/assassin who obeys the Hunter’s Rede; a series of rules the dictate the isolated lifestyle of an assassin. He has never questioned their necessity; until now.

He is summoned home by the mysterious Mistress of Eusiron and arrives to find the region invaded by the Faerin army. Even more alarming; a member of the Keepers of the Eye has been assassinated.

Lorth must use his wits, magic, and sheer determination to escape being framed for the murder, find the perpetrator and defeat the invaders. All the while, he must juggle the Hunter’s Rede – a selfish code – with morality, loyalty, and love.

This is an enjoyable read for those who like suspenseful fantasy. The world building is strong and specific; a requirement in fantasy stories. The battling kingdoms, the Hunter’s Rede, and the Keepers of the Eye are all thoroughly referenced and explored by the author. However, the origins of the Rede are vague and difficult to visualize.

The characterization is fuzzy at first but the reader eventually becomes well acquainted with many of the characters who decorate the story. Lorth, in particular, grows on the reader overtime. Some of the most enjoyable characters are placed in the background and only dip into the story occasionally – such as the amiable Captain Ivy.

The plot is entertaining and ornamented with twists and tension. The story focuses on its characters and conflicts but also has a strong theme revolving around morality and sacrifice, which finds its way into the story. You could say that The Hunter’s Rede is inspired by the video game series Assassins Creed; as I felt that it dealt with similar concepts, story models and parallel titles. But I enjoyed the variances that allowed The Hunter’s Rede to have uniqueness.

While the story has some thrilling action scenes, at times they were either too cumbersome or unclear. Overall the story was clever and entertaining except for the romance moments which come off as less inspired. The Hunter’s Rede is one proofread away from being a fascinating and exciting read.