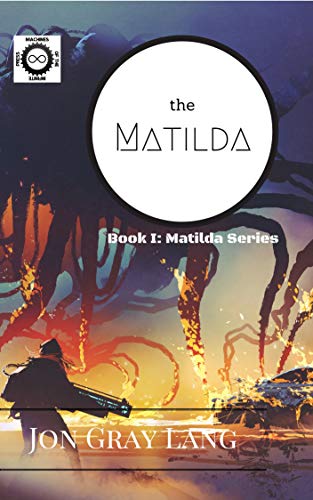 The Matilda by Jon Gray Lang is a science fiction adventure set in the twenty-ninth century. The crew of the spaceship Matilda are a ragtag bunch moving through the grey areas of space that are largely governed by The Consortium. They are soon joined by mysterious and potentially dangerous newcomers that alter their path. They are thrown together against hidden dangers and have to battle them together all the while navigating their personal histories and animosities. Captain Jacquie and her crewmates are at the center as the drama unfolds and fight to find the truth before it destroys them.

The crew was an endearing mix of quirky characters, Matilda included. She was given a surprising amount of character and personality for a spaceship. Luli Qing was my personal favorite– she was so effortlessly funny, competent, and generally cool. Jacquie was a delight in many ways: a sci-fi heroine in charge of saving herself and her friends. She was often in the  middle of complex moral dilemmas but she navigated them with finesse, keeping her crew a top priority. The chapter names were pretty wacky and, honestly, I was way too many chapters in before I gave in and Googled “Beauty and Stupid”. Turns out all of them are songs. I even listened to a few– more authors should definitely find ways to incorporate David Bowie in their books.

Even though the story was gripping overall, there some moments where I would have liked a little more clarity and straightforward explanation. I found myself having to re-read some passages to untangle what was happening to what. I suppose it’s a science fiction reader’s occupational hazard that one has to come across wild gadgets, events, and creatures and let our imagination make the best of it. The dialogue was snappy and humorous so that really helped in moving things along. The action builds quickly towards the end, leading to a twist that I did not see coming at all.

Ultimately, I thought The Matilda was a crazy and fun read. It is pretty quick paced, too– I was surprised when I reached the end and was left wanting to know what is to become of the crew. Author Jon Gray Lang gives science fiction fans a thrilling space adventure that is a ton of fun.