The Penitent: Part I 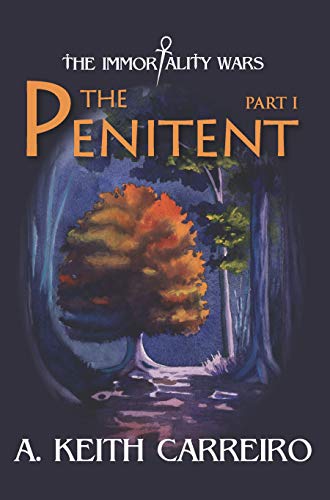 The Penitent: Part I by Keith Carreiro is a sprawling sci-fi fantasy novel. It also has a healthy dash of horror, war, and tragedy. Needless to say, it is a little bit intense but it is a satisfying and well-told story. It is about Pall Warren, an ostracized young man who does not know why he is doomed to live on the outskirts of life. Yet he makes peace with this and continues his difficult existence. Slowly, his background is revealed to us, and Pall finds meaning in his journey to find the truth. He pairs up with a mysterious archer, John Savage and the two form an uneasy but loyal partnership.

Pall lives a tough life and it was difficult to read about his daily pain and struggle, almost as terrible as his past. He has a lot of grit and moral strength, and manages to navigate life with his head held high. John is, as they say, a riddle wrapped in a mystery inside an enigma. I found his parts very entertaining as he was a droll and captivating character- probably my favorite. Towards the end, Evangel is also briefly mentioned- I’m very interested to know what part she plays in Pall’s life.

The story starts off slow and doesn’t shy away from laying out the atrocities and horror of Pall’s life. Some parts are gruesome, violent, and downright depressing but I think those parts were important in forming Pall. They may seem gratuitous, but as the story developed, I could see that this is what made Pall a consistent and strong character. The author brilliantly displays the psychology of people amidst war. The ruthlessness, and ultimately, pointlessness of political struggles seemed to be the root of evil to me.

The Penitent: Part I is an emotional rollercoaster of a story that looks at both sides of life. It shows how hope and despair can easily be a part of one’s fate when one has little control. Ultimately, it is about digging to find the truth and to have an unflinching moral code against one’s enemies. That’s what makes the characters and this story so likable. The nail-biting ending was superb and I nearly wanted to scream at the suspense. A thrilling beginning to a riveting epic fantasy series. 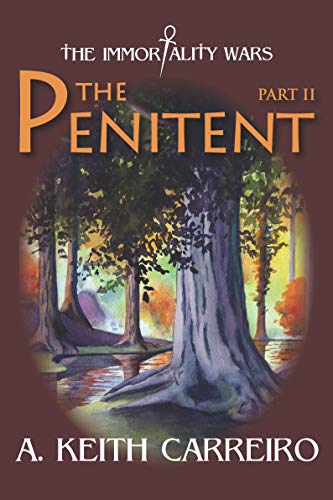 The Penitent: Part II introduces readers to Evangel. Rescued by a hermit and raised to embrace her powers. Although she tries to keep her powers a secret, fate has other plans for her. As she struggles with understanding her powers while keeping them hidden, one vision she has will change her life and the lives of countless others.

This is book two in A. Keith Carreiro’s Immortality Wars epic fantasy series. While I picked up the series at book two I was no less intrigued by the compelling world and lured in by the fascinating characters. Evangel is a character that is well accustomed to loss and pain. She’s a character I could easily empathize with and root for. The slow development, and evolution of her character, was something that kept me turning pages. The story is colored with base tones of faith and religion and I appreciated the subtly of its presence balanced with the far reaching effects it had on the characters. Evangel’s perspective of the world is a bit naive, but I found that to be endearing. In light of the dangerous world in which she lives I found it to be a welcome contrast that is well portrayed by the author. Her faith and beliefs are challenged, but what protagonist isn’t challenged in some way in a good epic fantasy novel?

I recommend starting the series with book one if you can, but otherwise this book is still intriguing. Pall is an interesting character that I would love to learn more about, especially since his story line seems to be so closely connected to my favorite character Evangel. Their relationship is intriguing and I wanted to explore it further.

A. Keith Carreiro has created an intricate world for some enthralling characters to inhabit. Things are rarely what they seem and I enjoyed the air of mystery that seemed to color everything coupled with a relentless sense of adventure. With deep world building and multi-layered characters, fans of epic fantasy will have much to appreciate in The Penitent series. I can’t wait for part three.