Inspired to Take a Leap of Faith

The Power of Us follows the emotional journey of two people that find strength together. What was the inspiration for the setup to this provocative novel?

I wanted to create two very different characters who each struggle with their own demons. Cassidy’s demon is her self-doubt while Harly struggles with guilt. While both characters are goal-driven and hard-working, there was always something holding them back from being truly happy. I think many people can relate to this and I wanted to create a story where the characters were far from perfect but still they found love in one another. Often in life we’re our own worst enemy and we’re fearful of taking the leap to follow our dreams. Cassidy and Harly found strength and acceptance in one another. My hope with the Us Duology is that readers will be inspired to take a leap of faith, especially if they’re being held back by self-doubt, because too often we don’t allow ourselves to see how special we are.

Cassidy and Harly are intriguing characters. What were some ideals that guided their character development?

Cassidy starts off as a driven young lady. She knows exactly what she wants in her professional life and she’s willing to work her backside off to succeed. In her personal life though, she’s guarded. Understandably so, considering her childhood. But then she meets Harly, and he unleashes a confidence in her that she’s never allowed herself to possess. This is especially evident in their intimate scenes. While Cassidy is young and naive in this department, most of the time she initiates the intimacy. This was especially important to me because Harly is quite a dominant character but I didn’t want him to dominate that area of their relationship. As the story progresses, so does Cassidy’s maturity. There comes a time in life when you need to fight for what you want and I hope readers will see that Cassidy grows into this role naturally. Harly is a strong character from the beginning but even he has demons. Without giving away any spoilers, he suffers from guilt which has made him guarded as well. But then he meets Cassidy and it’s almost like his attraction to her outweighs the force of guilt. It takes him a while to open up to Cassidy but it’s clear that he’s all in when it comes to their relationship. Cassidy’s love and acceptance proved to Harly that he was worthy of something he never considered – a romantic relationship. Most of us desire a partner who is willing to fight for us, protect us, and nurture us. I hope readers will find this in Harly’s character development because as the story progresses, so does his need to be everything Cassidy deserves.

Definitely overcoming self-doubt. Harly’s love gave Cassidy the courage she needed to fight for what she wanted. Secondly, I wanted to portray Harly as a confident man who isn’t afraid to show his emotions. He doesn’t always deal with it the right way, but there’s nothing he wouldn’t do for those he loves. Finally, friendship. Both Cassidy and Harly have amazing best friends. Cassidy’s straight-talking roommate, Emy, who on more than one occasion forces Cassidy to confront the cold, hard truth, is the girl everyone wants in their corner. She’s always there for Cassidy and she’s willing to protect her friend at all costs. Whitney is Harly’s best friend. She’s a powerhouse of a woman and similar to Emy, she speaks her mind, even when Harly doesn’t want to hear it.

This is book one in the Us Duology series. What can readers expect in book two?

Cassidy and Harly have to face some tough decisions and their journey won’t be easy. Readers can expect to see a lot more emotion from Harly and Cassidy’s character will develop even further. The bond readers already have with Cassidy and Harly will intensify as the reader is taken on an emotional rollercoaster.

The Power of Us 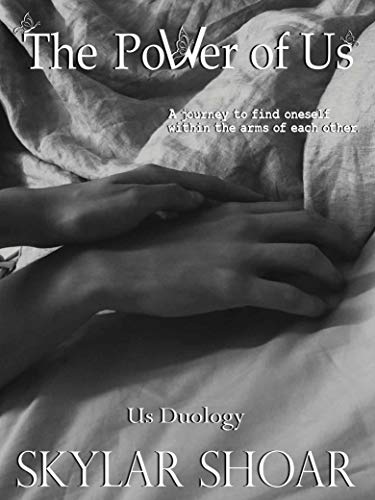 Skylar Shoar’s The Power of Us is utterly romantic. It follows the love story of Harly, a young billionaire and Cassidy, a college freshman. Although they come from entirely different worlds, they are drawn to each other from the first day they meet, their lives becoming deeply intertwined.

Naturally, they face many challenges, some instigated by family and others by foes. But they seem to be tenacious, at least when it comes to their love. However, something much greater than people’s opinions and reactions eventually threatens to wreak havoc on their union.

If there is one thing that makes this story so relatable, it has to be its main characters. Harly and Cassidy are so well developed, so well fleshed out that you would be forgiven for believing you know them personally. By writing the story from each of their perspectives, the author brings us into their inner domain, helping us understand why they act the way they do.

Apart from their love for each other, we also get a glimpse of how their childhoods informed the current personalities and thought processes. Moreover, we encounter powerful themes like loyalty, betrayal, revenge, and the need for belonging; all things that readers can identify with. But if I was to pick one thing that I loved most about this book, it would have to be its easy-to-read language. Its sentences are simple and clear, leaving little to the imagination.

While I enjoyed this story, I would have loved a more dramatic twist at the end, and a few more interesting facets that would make the story more unique in the romance genre and keep things from being predictable. The sex scenes, while steamy, reinstated the powerful man- innocent woman dynamic where I would have loved a unique twist.

The Power of Us is perfect for a mature audience interested in new adult romance. Readers looking for a dramatic love story with riveting scenes of love and violence will find plenty to enjoy in Skylar Shoar’s provocative novel.