The Reclamation finds Billy Jay Cader on death row and organizing other inmates to take the judgment of others into their own hands. What was the inspiration for the setup to your story?

Billy Jay is the kind of man that held absolutely no control over any aspect of his life as a young boy. Not until he took it upon himself to fight the struggles of survival, depending only on his own self, at age fourteen. From that point on, Billy Jay did not like to relinquish control of any situation he found himself in. This included being incarcerated. If he couldn’t control the guards, he knew he could control the inmates. His judgment on others was deeply ingrained within him. He felt it was his job almost and maybe facing his execution…his legacy too. Something he needed to pass on so it could live. He learned to enjoy it and probably at this point understood the power it had held over his poppa. The Mason jar was like a drug, it’s outcome the high or intoxication.

What were some aspects of Billy Jay Cader’s character that you wanted to explore in this book that wasn’t explored in other novels?

I think it would be the depth of commitment to judging others that he held. It never seemed to drift far from his psyche, no matter where he was or what level of life he was living. He couldn’t escape it. For a short time after meeting Cat, it seemed he’d outrun his devils…the drawl of being in control. I’ve not read a novel that showed the same kind of wrestling within oneself as Billy Jay’s struggles. The temptation to feel sorry for someone that keeps showing their dark side up and to a point that line is finally crossed. I wanted Amy Jo to be the polar opposite of Billy Jay yet somehow drawn into his magical control. It seemed like a great experiment to see if someone with similar experiences could connect and save him.

What kind of research do you undertake for your novels? Did you research any police procedures or the criminal justice system?

I admit that Google is my friend as a writer. You must be careful and of course not believe everything you find. I also have friends in law enforcement that I turn to and a fellow author friend who is a judge. This story also takes place from the beginning in the forties and up to now the mid-eighties. A lot has changed since this story takes place. It also takes place for the most part in a small southern gulf coastal Florida town. A one stoplight town with some characters who have worked themselves together in ways of leadership and trust. That is a scenario that will always bring interesting and thrilling stories.

What can readers expect in book 5 of the Mason Jar Series?

I’m going to reveal a little secret for what I am calling book 4.5 that will release hopefully in the first quarter of 2022. The new character introduced, Amy Jo Whitenhour, is the journalist writing her take from Billy’s point of view of his life. That story put together from what would be her interviews, will be book 4.5, and will even look as if she wrote it. The cover will bear her name and the story will be more of a novella size. Possibly a bit more than 40,000 words. It will fill in details of more depth and hopefully draw the reader more into the mind of Amy Jo. I believe she is a character that developed rather quickly and came natural to the story, so I’m hoping this next offering will get into the readers liking. At the end of her book, I will have a chapter or two preview of what I then will call book 5. Book five will close a lot of the cliffhangers and unknown and of course…hopefully draw the reader deeper into the web I hope to continue weaving. 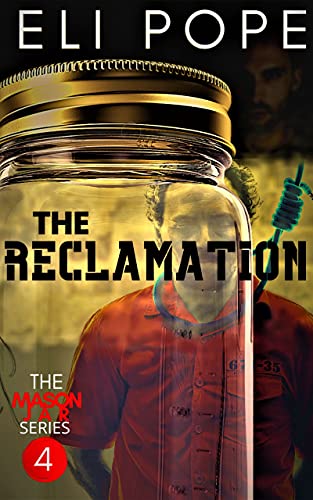 The Mason Jar Series continues in The Reclamation by Eli Pope! Billy Jay Cader is rotting in jail awaiting his execution for the murders of two members of law enforcement. But just because he’s in prison doesn’t mean the cursed judgment game has ended. Billy forms a group of death row inmates who take the fate of other criminals into their own hands. While all of this is happening, a journalist interviews Billy for a tell-all book that explains how he became the monster he is today. As the journalist digs deeper into Billy’s childhood, we have to further question, is evil born or made?

Eli Pope has done it again! The Reclamation comes in as the fourth installment in the beloved but disturbing Mason Jar Series, and oh boy, was it a literary masterpiece! Billy Jay’s backstory left me emotionally ragged. And that’s because, like the journalist, we begin to sympathize with him. Despite his horrendous acts, you can’t help but feel that they all stem from his childhood trauma. But on the other side of the coin, we know that Billy Jay is a master manipulator. He may be trying to tell his story for the sole purpose of getting people to sympathize with him. That aspect of the story alone demonstrates Pope’s immense talent for capturing human emotion through the written word. It’s complex, with multiple layers; the story is never black and white. I also enjoyed the Ethan, Joyce, and Cali storyline.

What I enjoyed about the past books in this series were the mystery aspects. The constant questions of, “what happened,” “who did it,” “is this person who they say they are?” I received all of that and more with these side characters! And before I wrap up this review, I want to further commend Pope on his ability to weave such an intricate story. This is a psychological thriller with ambitious depth, complexity, and vividness that I find unique to Pope’s writing.

If you loved The Mason Jar Series thus far, you need to add The Reclamation to your TBR! Fans of mind mending thrillers and nail biting suspense will thoroughly enjoy this enthralling crime novel.