Really Happened To Me

The Saga of the Phoenix is a riveting adventure story with a unique blend of genres. What was the inspiration for the setup to your story?

A few years ago, after spending most of my life abroad, I decided it was time to moor permanently ashore and retire to the countryside. Now, at my tender age of 76, it occurred to me to write. Not because I am an old man who is bored, on the contrary, living in a large old country house, I would find pastimes as a bricoleur at will.

One day, arranging old books on new shelves, I came across a radio engineering manual (not only was it obsolete but I think incomprehensible to anyone who deals with electronics today, unless they are also interested in archeology) that was served, in the mists of time, to take the state exam at the Ministry of Telecommunications in Rome and to obtain the patent of radio officer for merchant ships. Leafing through it with a bit of nostalgia, I confess, I began to think that this figure has not only disappeared for many years but, nowadays, few people know what it was doing on board a ship.

At that moment I said to myself that it would be nice to tell about it, not only because that role was part of my life for years, but also because, in those years, no ship in the world would have been authorized to sail without a radio officer on board. I therefore decided to describe and tell circumstances and events that occurred at sea and on shore, seen through the eyes of the protagonist, a young radio officer.

Halfway through writing the novel, I wondered if I wasn’t boring the prospective reader with adventures that, while interesting at first, became repetitive. Each storm is more or less similar to the others. All evenings spent ashore in an exotic port are alike. Human relationships on board are always the same, governed by an essential hierarchy. So I decided to insert a bit of mystery into the story, referring to my interest in the history of the universe and in astrophysics, which have always fascinated me as a curious self-taught person.

The characters in your story are intriguing and well developed. What were some driving ideals behind your character’s development?

In the first chapters the story is practically autobiographical. Giorgio’s experiences really happened to me. What happens next is a possible future that I would like to have experienced alongside characters who act for the good of humanity in an authoritative, if sometimes authoritarian, way. Encounters with alien beings have always fascinated me and I tried to imagine them as if the Terrestrians were always intent on bringing peace to other worlds but giving priority to their civilization for survival even if at times they may seem ruthless. In the novel there are several protagonists as Giorgio’s life ended, I like the idea that his mission is continued by his descendants who will follow in his footsteps and who will have as their goal, the mission of the Phoenix in the universe.

In the first volume, the Terrestrians seem to be the most evolved in the universe and are confronted with less evolved civilizations. Even more in the second volume, they will be practically the dominant species in the known universe, until something unexpected happens. In many science fiction novels, aliens invade the Earth, they are hostile, they try to destroy the human species. The conflict usually takes place between the evil and stronger aliens against the good and weak Terrestrians, who only at the end with some stratagem they manage to win. (as it happens in Independence Day movie, Netflix’ series Falling Skies and many other novels.) In my saga the opposite happens: the good and strong Terrestrians want to force the weaker and not always bad aliens to conform to their view of the universe. Eventually the question will arise as to whether it is right to impose peace by force even if it is for the benefit of all others. No one should be able to claim to possess absolute truth, but perhaps someone does.

I am writing the second volume where the Terrestrians will face a ruthless and cruel civilization and will have to force it into a peaceful coexistence with all other species. The dominance of the Earth in the universe will, however, be questioned by the incorporeal entities who had initially given birth to the Phoenix, on Earth and other worlds and who will ultimately prove to be the very foundation of the universe.

Most likely, the second volume will be published by December 2021.

The Saga of the Phoenix 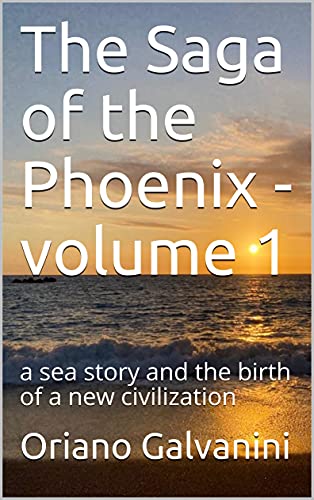 Giorgio is finally living his dream to work as a radio operator on cargo ships, but little does he know that life has a lot more planned for him. In a strange turn of events, he receives an ominous radio message on one of his voyages, asking him to meet with a peculiar individual. The meeting introduces him to a secret organization and sets him on a path paved with covert operations, futuristic tech, and a lofty ambition to unite the world. Who’s behind the Phoenix, what’s their true aim, and how will Giorgio fare in his new position?

The Saga of the Phoenix is a spellbinding work of literary fiction. This interesting historical fiction is a blend of adventure and science fiction. Beginning in the 20th Century, Galvanini narrates a sailor’s shenanigans before he delves into the young man’s exciting journey as a member of a group looking to change the world. One high point is how Galvanini explores various cultures. He takes readers around the world through the main character’s sea voyage, a worthwhile experience for adventure lovers. The book also doesn’t lack imagination as Galvanini deftly combines fantastic tech with space travel, extraterrestrial life, and political and economic maneuvers, all spiraling into a global utopia. The first few chapters are sprinkled with a bit of intrigue here and there, but once you get past them, you’re in for a fairly exciting ride.

Conflict is the lifeblood of every engaging story. It’s the seemingly insurmountable obstacle the characters have to overcome; the evil that needs to be conquered; or the heart that needs to be won. I would have loved to have seen the conflict built up a bit more in this novel so that it felt on par with the excellent story telling.

The Saga of the Phoenix – volume 1 is a dramatic sea driven adventure story that takes readers on a historical journey that is fun to read.