Their Ability To Be Loved

This Mess You’ve Made follows the lives of two people who face many obstacles and find strength to overcome them together. What was the inspiration for the setup to this riveting novel?

Every story has more than perspective. We often only think of ourselves as the main characters in our lives and more often than not, this never captures who we really are. Realistically, we are more than we believe and sometimes, we are even a villain in someone else’s story. For the purpose of this novel, I wanted Savannah and Aryn to be portrayed through the eyes of each other so their ability to be loved is able to shine through. We don’t necessarily need someone else’s validation to feel worthy of love, but it helps us gain perspective, confidence, and strength.

Savannah and Aryn are intriguing and well developed characters. What were some driving ideals behind their character development?

I take pieces from my life, my relationships, and build characters. I take both the good and the bad from people who have impacted me. I also take the negative and positive qualities I see in myself. I try to make my characters simultaneously unique yet highly relatable. I wanted Savannah and Aryn to be characters you’d like to know in real life, people you’d root for and cry for, but love enough to be willing to tell them when they need change for the better.

What were some themes you wanted to explore in this book?

I really wanted to explore the devastating effects depression, guilt, and anxiety can have on a person. Mental health is still such a taboo topic and it’s often described as “tragically beautiful.” But not only do people experience depression, guilt, and anxiety in different ways, but we shouldn’t try glamorising someone feeling like a stranger in their skin, or feeling disconnected from those they love, or feeling like they have no future. These are serious issues that we need to have open discussions about because more people go through these struggles than we realize.

My next book is actually completely divergent from “This Mess You’ve Made.” My next novel is called “Quietus” and it’s a dark, paranormal romance novel (new adult). It should be available for purchase late spring/early summer. Here is the blurb: There is an age-old prophecy that foretells of a girl born from death itself. Devlin Raben is that girl, a witch born with death trailing her shadow. She has lived her entire life in the dark, feared by those outside the witch community as an omen meant to bring the world to its knees. She has always been a prisoner to fate and a prophecy she never chose to be part of. Now, she is hiding in plain sight, afraid of her power and the war she is destined to start. But can she truly defy fate when love and her freedom are also at stake?

This Mess You’ve Made 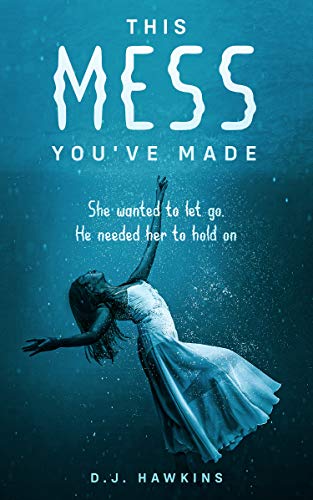 In This Mess You’ve Made, author D.J. Hawkins gives the reader a story which explores themes such as depression, grief and suicide. Chapter by chapter we follow the different points of view of two high school teenagers, Savannah and Aryn. Through them we see their struggles and how they’ve almost given up on life but, after meeting each other, they’ll realize that there still might be more out there for them. Hanging onto hope, Savannah and Aryn’s relationship fuel a flame inside of each that could change everything. Their love might be exactly what’s necessary to save themselves. Darkness meets light, hatred finds love, D.J. Hawkins shares with us the possibilities of healing and recovery despite the brokenness of one’s soul.

From the very beginning Hawkin’s writing is incredibly descriptive and full of emotion. The reader is able to paint a mental picture of how the main characters see themselves and their lives. The reader gets a very clear glimpse of how broken they are, how they feel and how they view the world. Allowing the reader to be immerse in each of their stories and experience a path that goes from helplessness and loneliness to hope and love.

The importance in our existence of friendship and family is shown, given that their impact can make the difference between life and death. It was nice reading about the varying relationships: both Savannah and Aryn have supporting friends that truly care about them and try their best to cheer them on and push them through life despite their misery. When these two meet, they understand perfectly how each other feel. Their darkness is what will unite them in the first place, bringing with it the light that they very much need.

The story can be heartbreaking at times, but hope keeps the reader wanting to see where everything is going to lead to in the end. I only wish that we had been able to see a bit more of the characters’ personalities, in particular of Savannah’s, but I guess that everything that she had to go through didn’t allow for her to show or develop much of herself. On another side, it was great to follow Savannah and Aryn’s relationship growth, which made me want to read more about them together, because the story was so much more deep and passionate when they’re on the page.

This Mess You’ve Made is a riveting coming of age romance novel that examines mental illness, recovery, and the importance of healthy relationships in an engaging and thought-provoking way.