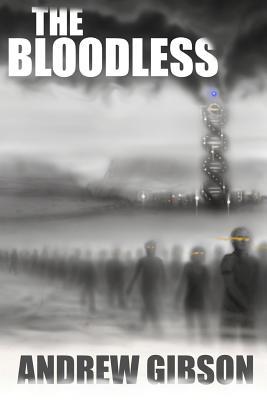 The Bloodless is a story of a small makeshift band of soldiers, weapons experts, and one pacifist (who is paradoxically a weapons designer) that are taking on the world, both living and undead. The battle began when GoD Laboratories, a company which began the first reanimation of dead humans, had an unfortunate “event”. Shortly, after “The Cloud” happened and another version of the “undead” was created.

Daniel Justice, a former high-ranking GoD scientist who worked on the “undead” experiment, lost his family to the “undead” (“Bloodless”) and became a prime target for one of the Bloodless in his experiments. He wants to make things right, but to do that he needs to get back to the compound safely and end the death toll left by the Bloodless.

In a world facing this kind of danger, Justice is understandably not the hero that anyone would like to see. He is, however, the only person that might be able to keep that world from becoming Bloodless. With his band of ragtag weapons specialists, Justice leads the mission toward destroying the evil-manufacturing compound that used to be his former job.

The first thing that really stood out was the originality on the same old zombie story. The Bloodless find creative ways to create new types of zombies. There are the traditional zombies, but there are also fast-moving and highly intelligent ones with military training and a tendency toward cruelty.

The two stand out features of this book are its conciseness and use of flashbacks which complement each other. Bloodless doesn’t take a lot of time offering background details or extended character descriptions. Instead it focuses exclusively on action and allows the reader to connect the dots through the use of flashbacks. The book begins with Jackson and his in an intense fight and ends with that same team fighting for their life. Throughout the race to complete specific missions, readers gain small insights into the characters. Justice becomes less of a cold scientist and more of hero trapped within a maze of evil that is bigger than him. Crist becomes less of a mysterious (yet paradoxical) stranger, and more of a reason for Justice to continue fighting.

While I enjoyed how concise the book was I had an issue with the overuse of clichés and loose ends. The book played a little too close to the stereotype for most characters. Almost everyone in the book seemed to fit the composite of the well-muscled hero or heroine who knew how to use a weapon.

Overall, the book reminded me of “The Walking Dead” mixed with characters from the “Expendables”. The book was intriguing, a well-paced plot, along with a unique approach on the zombie theme would make for a great read for action/adventure and zombie fans. I look forward to the rest of the series.