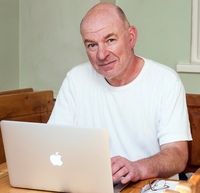 Conversations with Eric is a crime comedy filled with tension and absurd humor. Simon blunders into a world of stolen cars, robbery, car chases, narrow getaways, murder, and corruption. What was your inspiration for the crime spree that Simon goes through?

I love ‘Road’ movies. They physically describe the journey the protagonist makes emotionally. There is a great example of this in Bob Gale’s (Back to the Future et al.) Interstate 60. I saw this film some time ago and wanted to write something using that structure. I love the episodic build-up that imperceptibly takes us on the arch of the characters in small, pithy chunks.

Simon’s dog, Eric, is the only one that he can talk to. Even though Eric doesn’t have great conversational skills I felt that their relationship and conversations were still strong. Do you have your own dog?

Eric is real. He died a few months ago having been by my side for nearly fifteen years. Everyone that knew him agreed that he was not a dog; he was a very wise, funny and extraordinarily perceptive human inhabiting a Labrador’s body. My partner often commented that I never spoke to him as though he was a dog. I talked to him as if he were simply another person living in the house. What was so hard to understand? He was!

I think that has to be Archie. He was such an easy man to write. He is so honestly dishonest. He calls a spade a spade. Every day I was writing the book, I looked forward to sitting down at my desk with Archie. He wrote himself. I never quite knew what he was going to do or say until he did it, right on the blank page, in front of me.

I felt that you did a brilliant job with Simon’s character, playing his anxieties perfectly. He lost his job, wife and house, and seems to be barely keeping things together. What was your inspiration for Simon’s character?

Some authors refuse to admit that they are writing about themselves; some do nothing else. Simon was me in so many ways. I hope that I am less inept than him, but I am as lost and certainly as confused. The main difference between us is that Simon didn’t realize how much he was under-achieving in his life; I think I do. I have been searching all my life for a satisfying purpose. Maybe I have finally found it in writing? As I say in the dedication of my new thriller As Mad as Hell, ‘To my mother, who gave me my very first birthday present. I have been trying to find a use for it, my entire life’.