← A John McClane Fairy
What if a Hoax Became Terrifyingly Real? → 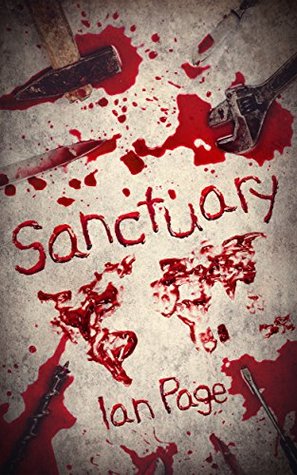 Ian Page has written a book that will change the readers view of how the typical apocalypse novels play out. This is unlike anything I have read before. One key difference is the apocalypse is not triggered by zombies, or a nuclear war that leaves the planet desolate. Instead there is a sickness that strikes in what appears to be a random selection of people. It is taking over the world, people and animals. Another refreshing difference is the main characters are not your typical white Americans. The first two characters that you meet are women, Deeta Nakshband, a doctor that was born in India and whose family moved to the US, and Janelle Jefferson, also called JJ, a bodybuilding black women from Bridgeport Connecticut. Both women have military experience. This breaks from the traditional lead characters you find in novels and puts this book in it’s own category from the start. Another key difference in Sanctuary is Ian Page’s ability to write like you are living with the characters. Most books focus on the action and fast track the reader though one action scene to the next throwing in some personal information in-between, sometimes feeling awkward or like you are looking back in time. Page brings the characters to life through their interactions with each other in the mundane day to day activities. Things like making a cup of tea, eating dinner, or working out are all part of the daily interactions that make the characters come to life. You really get to know them as they live and not just a quick bio to push the plot along. This personalization of the characters is what draws the reader in and keeps them turning the page to see how they all interact. I kept wondering, who will make it through this alive.

Some of the other characters in the book are Gary, who is a Buddist monk, adventure climber, and skilled fighter, the couple of Wesley and Hakura, that bring their own set of servile skills to the group, and various other doctors and family members. The world is coming apart all over. There is another world war brewing and hate crimes are skyrocketing. Reminiscent of the internment camps that were created in WWII for the Japanese citizens, Muslims are being rounded up as terrorists and detained for questioning. Deeta’s family tries to hold together despite many losses and terrifying close calls. She realized she needs to get her family and friends to a safe place. All the preparations that her collection of friends have been making are put into action and they set out for what is called the Sanctuary.

Santuary is a realistic contemporary story that plays off many of society’s current fears. Page talks about the conflict between North and South Korea, the conflict in Muslim countries, the fear and hate that infects society all through the world. All these modern and current issues are played out this this complex novel. The underlying message I feel though is that there are still good people out there that want to help others and are willing to do what is needed to keep society from falling into total despair.

If you are interested in modern timelines and current events this is a great novel. It is gruesome in its details at times. The murder scenes are vivid and plentiful. It’s an interesting look into the human mind and how people handle the stress and complex situations that the mass sickness brings out. Ian Page gives readers a glimpse into what humans are capable of, both good and bad. Sanctuary ends in a way that leaves room for a sequel and there is more than enough action left to happen, and many questions left unanswered as the book draws to a close.

← A John McClane Fairy
What if a Hoax Became Terrifyingly Real? →