← The Six and the Crystals if Ialana
The Hobbymen →

Call of the Conjurer 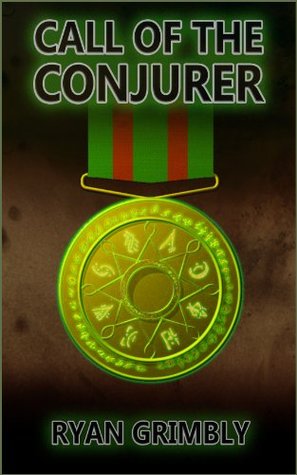 Call of the Conjurer by Ryan Grimbly is a story about soldiers brought together to be initiated into combat, but not any type of combat; magical combat. These soldiers each have a special ability that makes them critical for an army. One particular soldier, Ace Mcdagger, is unaware of what his special power is, but clearly is able to survive situations that seem impossible. The ordered to train the soldiers is Captain Calbert Mason. He is forced to face his past while the soldiers battle their own challenges

One of the things that makes this book so interesting is that it seamlessly blends magic with science, romance with horror while also revealing the horrors of war. If you are thinking this will be a typical military strategy book, you are both right and wrong. There are elements that set this book apart such as the magical elements, but also things that make it very much like a military book such as the battle scenes along with some technical tactical jargon. Which I believe would be great for anyone who likes a good military fiction novel. But if your sensitive to profanity, be warned, there is a lot in this novel.

Grimbly excels at creating vivid scenes that draw the reader into the story. He paints a scene that readers are able to visualize and almost feel the effects of a war happening around them. Transition between scenes are done seamlessly which is the technical mark of a good writer. It is very evident that Grimbly did research on military tactics, maneuvers and formations which gives the book an air of realism, even among the magical and supernatural elements to the story. The idea of building an army based on different magical abilities is interesting and draws readers to a new genre such as a fantasy lover reading a military-based novel for the first time.

Overall this book was well written and an entertaining. It successfully blends two different genres for readers who enjoy military, war, and strategic novels, and those who like fantasy and magic. I would recommend this novel for people who are trying to branch out for their normal reading genres.  You’ll find plenty to enjoy in this fantastic paranormal fantasy novel.

← The Six and the Crystals if Ialana
The Hobbymen →