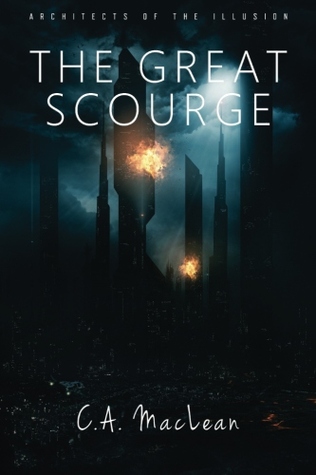 Architects of the Illusion: The Great Scourge, by C. A. MacLean, picks up where his first book, Seed of Treachery left off. Although Ashy was exiled from her home planet of Karani (a planet full of bird-like species), she felt compelled to return only to find it in peril. When things take a turn for the worse, Ashy must flee the planet and finds herself on planet Everan with mutant beings who are able to – unbelievably – reunite her with her sister, Eva. Together, they must fight all the adversaries that they come across in order find the answers they need and secure the future.

The characters in this book really come alive. The main characters are Ashy and Eva – who are adopted sisters from the planet Karani. Additional characters that play a major part in The Great Scourge are Curren, a bounty hunter, Caleb ‘Maven’ Braze, Daniel, Hannah and Admiral Andora, as well as a handful of secondary character. Mr. MacLean has a way of bringing these characters to life with their unique personalities and quirks. From the synopsis only, I knew that it would be an interesting book. When I began, my interest grew. As the pages went on, I began to understand more of the different lands. I began to get these feelings for the characters and began to feel empathy for them. Only telling a little bit of the story is very hard. What I can tell you is that every character, from major to minor, is so cleverly written and wisely interwoven, that you begin to think that if someone who was only mentioned once in the background may have a future story.

C. A. MacLean’s writing is almost indescribable. It’s simple for children and teens, yet complex so that an adult may love it. The way he writes his characters make you grow attached to them. His lands make you want to explore them. He never gives anything up too easy, leaving some of the things to your imagination. His descriptions of the lands make you feel you can reach out and touch them. However, it leaves just enough to your imagination that each person can see the land in his or her own way; which is one of the best parts.

The plot moves along at a good pace. There are surprises and mysteries that kept me reading late into the night to find out what was going to happen. This is a powerful story with some chilling and disturbing scenes without ever resorting to gore. It is deeply absorbing and has moments that I know I will remember for a long time, certainly any time I see a wisp of smoke rising on the horizon. The final paragraphs were breathtaking and managed to give a satisfying ending to the book… but I’m still anticipating the next one. You’re missing out if you haven’t read this book.