← Fractured: My Journey Back From Death and the Lessons I’ve Learned Along The Way
Two Polluted Black-Heart Romances → 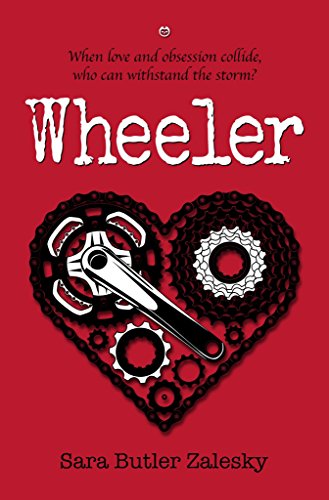 A little bit romance novel, a little bit suspenseful thriller, and a thorough introduction to the world of women’s cycling, Wheeler by Sara Butler Zalesky is an enjoyable and well-written story of a strong female protagonist battling both physical and emotional challenges. Spanning just a few months in professional cyclist Loren MacKenzie’s life, Wheeler is a whirlwind of a read. It begins in the heat of her cycling competition season when she meets handsome actor, Graham Atherton, roadside after a well-timed popped tire and follows their blossoming romance as well as Loren’s cycling competitions across Europe. It’s not all easy riding for Graham and Loren though, as Zalesky weaves intricate relationships between Loren, her teammates, family, and a sinister former boyfriend who is dangerously obsessed with Loren.

Readers who are familiar with professional cycling will doubtless appreciate Zalesky’s attention to the sport, and even readers who have no prior knowledge will enjoy learning about the strategy, training, and teamwork involved in cycling. Zalesky expertly creates a believable and enthralling team dynamic, following Loren and her team through both victories and crashes. Crafting relatable characters and developing story lines over the course of the novel is one of Zalesky’s strengths. Though the first half of the story feels rather one-dimensional with clichéd characters (the hyper-driven female athlete; the handsome, Shakespeare-quoting actor; the jealous ex-boyfriend), Zalesky develops her characters so that by the second half of the story, each of these characters has a well-defined history and far exceeds expectations.

Whirlwind romances are, of course, fun to read and daydream about, but the almost instantaneous and passionate relationship that Loren and Graham form feels forced. Their relationship is full of Shakespeare quotes and French puppy-love nicknames (hundreds of variations on mon amour and ma cherie are tired after awhile). But midway through the novel, Zalesky seems to hit her groove and relies less on these easy wordplays for content, allowing Loren and Graham to have more meaningful conversations. This is pleasing for readers, who may not have realized the novel they were reading would have more Shakespeare than they had read since high school.

Overall, Wheeler offers readers an intriguing literary escape into the intense world of women’s cycling and creates a protagonist that readers will consider a good friend by the end of the story. While few people could withstand the physical challenges that Zalesky puts in front of Loren, it is the emotional challenges she faces that make Loren such a wonderful character. Wheeler examines challenging topics such as emotional and physical abuse, the difficulties of balancing work and relationships, and familial estrangement, and does not shy away from painful moments. Multi-dimensional, inspiring, and sometimes heartbreaking, Loren will have readers rooting for her successes and looking forward to a second installment. Hopefully Zalesky’s second novel will come soon, as Wheeler’s abrupt end may catch readers off-guard, feeling almost as if they’ve fallen off their bikes unexpectedly.

← Fractured: My Journey Back From Death and the Lessons I’ve Learned Along The Way
Two Polluted Black-Heart Romances →