The Hunt for the Three Roses follows Callie and Kane as they try to leave their old life behind in a world consumed by war. What were some themes you wanted to carry over from book one, and what were some new ideas you wanted to explore in this novel?

This trilogy is all about the upsides and downsides of organized religion. The first book was about how a religion can be a source of guidance and hope in the best of times and a source of uncertainty in the worst. The second book is about how wicked and/or misguided people can make things up that fit within their worldview and pass it off as official religious doctrine. The very identity of the Three Roses (at the risk of giving a spoiler!) is about how different minds and ideologies can fracture a faith for better or worse.

Kane and Callie are intriguing characters with emotional depth. Was there anything from your own life that you put into your characters?

Much of my early life I put into Kane. I tended to be a goody-two-shoes who pointed out people’s bad behavior, especially their profanity. I’ve relaxed that side of me, just as Kane eventually did. Callie is simply someone I’d like to be more, a person who has little problem in speaking her mind and being rambunctious.

This novel, and series, have a rich backstory. Did you create the backstory before writing the novel or did it develop organically while writing?

Some segments in my early books were created organically, but Hunt for the Three Roses was mostly planned ahead. I thought about the plot for months before, often making changes without needing to write anything down. When I started to write, I felt well prepared to go ahead and work without fear of writer’s block.

This is book two in the The Three Roses Trilogy. Where will book three take readers, and when will it be available?

Sean and Callie have settled down, but not for long. They’ll have to be taken well out of their comfort zones so they can discover the truth behind the Three Roses, and just as Callie’s past came to haunt her, so too will Sean’s. Despite the presence of magic, the action scenes in the second book were rather grounded, but in the next one, the action will be rather ethereal. The release date may be sometime in 2020, or possibly 2021. 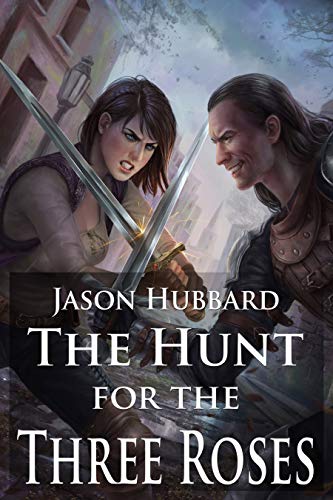 Change is in the winds in this high-stakes, emotional fantasy adventure!

On the run from the army which he once proudly served, Kane Bailey changes his name to Sean, leaving nearly every shred of his old life behind. His old tutor, Master Cypher, helps guide Sean and gives him a mission that’s more important than Sean realizes: Bring an older, simple-minded man named Jonas to the Royal Palace, where he’ll be safe.

Callie meanwhile is unsure what she wants to do in life. Leading a criminal lifestyle is all that she knows, but it would mean starting from the very bottom. But while her future is up in the air, her dark past rises to haunt her. Rainer the assassin has a score to settle, and he wants to make it as painful and heart-wrenching for Callie as possible.

In this second installment of the Three Roses Trilogy, the hunt is on … and there will be blood.