← Free Love and the Sexual Revolution – Trailer
11 11: The Awakening Code →

A Swift and Deadly Maelstrom: The Great Norwich Flood of 1963, a Survivors Story 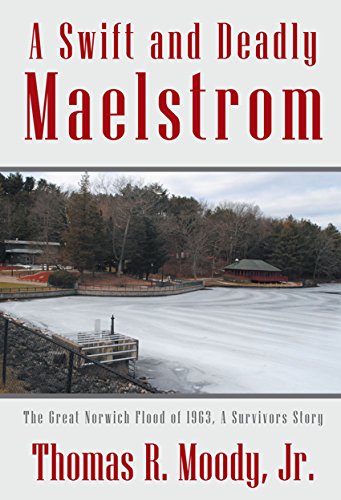 March 1963 saw the devastation of the Great Norwich Flood and the aftermath that left one town struggling to pick up the pieces. One young boy and his family found themselves fighting for their lives when the dam wall burst and a watery hell was brought forth on their homes. As floodwaters moved from an odd trickle down the center of the street before them to a panicked roar, author Thomas Moody, his parents, and his siblings made a mad dash to escape their home and flee to higher ground. Neither the Moodys nor their neighbors could have predicted that a normal, peaceful night could have so quickly turned deadly for so many residents of their town.

A Swift and Deadly Maelstrom: The Great Norwich Flood of 1963, A Survivors Story, by Thomas Moody, is the account of the night that took his own mother’s life and changed the course of history for so many friends and neighbors in his hometown of Norwich, Connecticut. Moody, a young boy on that fateful night, relates the facts of the dam’s construction, its subsequent mismanagement, and the events leading up to that fateful rupture when the waters spilled into the streets, sweeping away automobiles, filling the local mill, and pulling citizens under its torrent.

Moody’s insight into the deadly night is invaluable to the reader. In addition to relating the events as they occurred and how they impacted families across the city, he includes his own thoughtful analysis as to what may have actually been the cause for his mother’s inability to maintain her grasp on her father’s hand in the final moments of her life. The heartbreaking moment his family loses their beloved wife and mother will forever be etched in the readers’ minds.

Moody gives readers stunning imagery over which to pore as he moves from one stage of devastation to the next. Accounts from other survivors serve to strengthen the impact of Moody’s writing and continually add layers of emotion to the tragic story. Moody includes the most amazing mental images of homes and businesses that miraculously escaped the floodwaters with minimal damage or no effects at all from the dam’s hellacious rage. Interspersed throughout Moody’s writing are stories of shining moments, making the overall tone of the account more bearable. The author manages to provide a wide array of views on that ominous night in March.

To find as an adult that the safety and security of the dam’s structure was so blatantly overlooked year after year and ultimately led to his mother’s death had to be unimaginably emotionally draining. I cannot imagine the strength and fortitude it must have taken to write the story of his own mother’s passing and relive the horrors of that night in print, but Thomas Moody has provided us all with a survivor’s account worth reading and taking to heart.

← Free Love and the Sexual Revolution – Trailer
11 11: The Awakening Code →