← The Audric Experiment
The Endowment of Isaac Frey →

Tiny Tim and the Ghost of Ebenezer Scrooge – Audiobook 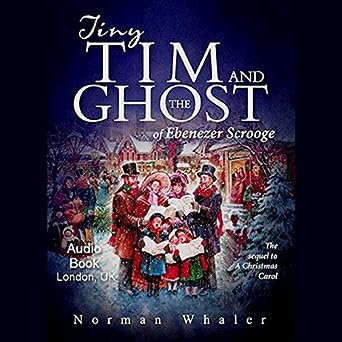 Tiny Tim is all grown up, and everything he loves and holds dear has been ripped from him. Upon the death of his dear friend, Ebenezer Scrooge, Tiny Tim begins to question each of his beliefs and the very faith that had been instilled in his family with the love of Scrooge himself years ago. Tim, now an adult, is faced with the loss of another of his dear loves, Becky. As fate would have it, Becky is simultaneously suffering through the most trying time of her young life on the streets with her young son and no place to lay their heads. Just as fate intervened fourteen years ago in the form of Ebenezer Scrooge, fate lays its hand on upon Tim once more.

Norman Whaler has crafted a beautiful tale of faith, hope, and love in his sequel to Charles Dickens’s A Christmas Carol. Tiny Tim and the Ghost of Ebenezer Scrooge – Audiobook details the events surrounding and immediately following the death of an aged Ebenezer Scrooge. Tim Cratchit, once the young crippled boy benefiting from Scrooge’s change of heart in A Christmas Carol, is impacted most of all by Scrooge’s death.

From beginning to end, Whaler’s sequel to the beloved classic pays homage to the original plot and the beautiful transformation made by its key character, Ebenezer Scrooge. Though Tiny Tim, now all grown up, is the title character, he also exhibits a change of heart similar to that of Scrooge. Tim fights a battle within himself as he struggles to regain his faith. Whaler does a phenomenal job of adhering to the feel of the original book with his references to Scrooge’s character transformation. The reader watches as Tim fights a similar battle and, ultimately, wins with Scrooge’s help.

As a fan of the original tale of Scrooge and the Cratchits, I could not help but fall in love with the parallel story line and the magic of three as it again reared its head in Tim’s life. The sound quality and voice over is exceptional in this audiobook and delivers this lovely story in a clear and crisp manner. Scrooge’s reappearance from the afterlife is expected but quite fitting. Whaler has done Dickens proud with this quick read rich with character development and steeped with faith.

← The Audric Experiment
The Endowment of Isaac Frey →