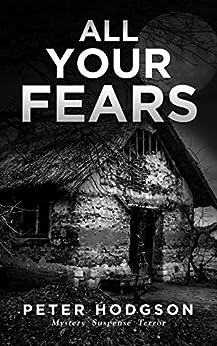 All Your Fears, a novel by Peter Hodgson is a riveting story of a troubled woman. Kim lives in a small town in England. She works in a hotel cleaning rooms and lives on her own with her Labrador, Smarty. From the outside, she lives a regular life by anyone’s measure. Underneath the surface, though, there is unrest. Kim hears voices and has hallucinations. Only small clues are given about her past and personal life. Is Kim struggling with a past that is haunting her? Is she, herself being haunted by a ghost or some other sinister force? Is she strung out? Is she suffering from a mental illness? The answer to these questions unfold as the story progresses.

Hodgson has spun together a masterful work laced with mystery. I love a good mystery, and Hodgson kept me guessing until the very last chapter. Nothing can be taken at face value and no one can be trusted. I suspected everything and everyone. Is something really happening or is it a nightmare or hallucination? At times, the reader won’t know until Hodgson decides to reveal the answer. Protagonist, Kim, often doesn’t know the answers herself. She doesn’t know up from down or real from imaginary.

I got invested in the characters from the start. I got wrapped up in Kim’s story and her relationships with the people around her, especially Jay. The characters were well-developed as layers were peeled back a bit at a time. Hodgson keeps his cards close to his chest in some areas to build the mystery and drama. Anyone who has been shocked to find out something about an acquaintance will sympathize with the story. I think that fits us all. We have all known someone who turned out to be someone far removed from who we thought they were.

I like Hodgson’s style. Even without giving the book a first person voice, the reader will be able to get a feel for the characters’ thoughts and feelings. Dialogue and the exposure of personal thoughts lets you delve into the characters’ minds. I also enjoyed how Hodgson set the scenes of the book through his meticulous descriptions. He makes the reader “see” the old streets crawling between weathered buildings. He describes old cottages in a way that makes you smell the damp air. His use of language makes you feel like you’re there in the town with them.

Hodgson’s well-crafted sentences kept me interested from the start. It is an edge-of-your-seat kind of read. I’d love to read more of his work.