← That Loving Gesture
On Loving →

Plum Rains on Happy House follows an American who is trying to turn an Inn into a school but is thwarted by the house’s strange creatures. What was the inspiration behind this unique story?

I live in Japan, and it’s a place I know well. The book’s dedication probably says it all:

This book is for Japan. It’s the place I call home—though it may not want me to. For over 25 years I have grappled with the dos and don’t’s of my host country, destroying the language in conversation, giving up, resuming more study, eventually resigning myself to the boundless plateaus of almost-speech.

And Japan abides. Like a patient steward, it absorbs the frolics and the ribbing, while providing a solacing habitat in which to write and teach and parent and grow.

I came over to Japan in the 80’s and I’ve lived in some pretty seedy guesthouses—what we call gaijin houses. In creating the residents of Happy House, I just mingled the characteristics of a few of the unique people I’ve met over the decades in Tokyo and in Los Angeles. In some cases, I didn’t need to exaggerate at all.

On one level Plum Rains on Happy House is a detective story. A fellow named Harry Ballse invites the protagonist, nicknamed the Ichiban, to Japan. But the residents of Happy House all deny any knowledge of this mysterious Harry Ballse.

Some readers may pick up on the references to the 1973 film The Wicker Man, about a policeman who is lured to a Scottish island to investigate the report of a missing child. It’s a game of deception. The islanders are playing with him. The paganism and the sexual activity the sanctimonious policeman finds so objectionable are simply part of the selection process—to see if he possesses the characteristics to burn in their wicker effigy so that the village will have subsequent successful harvests.

In Plum Rains on Happy House, the Ichiban must undergo his own horrific sacrifice to appease the house. My novel is in many ways a tribute to that remarkable film, and it has the same foundational plot lines, but I’ve laid down a hearty layer of satire and lots of cross-cultural lunacy.

There are some weird and fascinating things happening in this story. Was this an easy outlet for your creativity or was there some effort put into creating these things?

Nothing is easy. If women will forgive me the metaphor, creating Plum Rains on Happy House was like giving birth—it hurt a lot. There were points when I considered giving up because it was just too hard. I’m not a funny person, but I have little trouble dreaming up wacky stories and characters. The residents of Happy House had to be distinctively quirky. I didn’t know how bawdy things were going to become, or how much depravity would creep its way into the story. But once I had the characters they took charge, and I relegated myself to being, more or less, their stenographer.

Dialog was also something I paid close attention to. Of course, sharp dialog is vital in any story, but for this kind of back-and-forth humor to succeed, I felt it really had to have zip. Just like a comedian practices his delivery line, the dialog exchanges had to have real punch. As with most writing, dialog should say a lot , with very little. The communication isn’t in the words being said but in the subtext. Good dialog says it without saying it. One quick example from Chapter One has the resident of Room 3 (nicknamed The Goat) explaining to the new resident about his missing foot:

“I saw you looking at the bottom of my leg.”

The Goat scowled. “Obviously, you can see that no longer exists.”

The Goat went into a cross-eyed fluster. “What is?”

Sometimes readers need to work a bit to understand the exchange, and I think they appreciate that. Dialog is an organic process. It’s the way characters talk in my head, and I think I know how to write them because they are all a part of me. It all works toward satisfying the element of what a good scene often comes down to: one person trying to get something from another.

Mix that in with the baffling idiosyncrasies of Japan and its language, and the vexing stages of culture shock, which frame the Ichiban’s adventure in Happy House, and readers have a lot to juggle, especially those uninitiated to living in other countries. I’m hoping this confusion is a part of the magnetism of the story. On top of that, one should remember the old guesthouse is haunted:

“Happy House is an amoeba everlasting, a floating world—capturing and sealing the self-indulgence of the red-light districts, the bordellos and the fleeting, delightful vulgarity of ancient Japan, an eternal time capsule of the flamboyant and the boorish.”

What do you find is a surprising reaction people have when they read your book?

The book has received mixed reviews. Of the five books I have up on Amazon, Plum Rains on Happy House was the first to receive a customer review of one star—perhaps rightfully so: the reader was “disgusted” by some of the more explicit scenes, and I think that was my fault; the earlier cover gave no indication of the sexual content within, and this poor woman was clearly ambushed. With the one star, I know I’m finally an author, and wear it as a badge of honor.

There are, however, cultural elements in the story that some will not understand: the usage of the various slipper customs inside a house, the daily beating of the futon, the laundry poles, the shockingly steep stairwells, the neighborhood garbage trucks that play cute tunes to let you know they’re coming, the confusion between the colors of blue and green.

The dichotomy of substance versus form also plays an important part in underscoring the tension—in the way one swings a tennis racket, or walks in a swimming pool, or plays baseball, or eats particular dishes: What should predominate—what you are doing or how you are doing it?

On another level, the story examines language acquisition and the role of structure within the learning process. The residents all have their various opinions: As teachers, should English be taught through some kind of lock-step formula, or would one be better off approaching it in a more hands off manner, rather like painting? Everyone seems to have an opinion.

The idea of structure comes to the forefront again when discussing what one character, Sensei, calls the hidden structure of the house, which, like the neighborhood (or any cityscape in Japan) appears as an amorphous sprawl. But look underneath this sprawl and one sees the organism. Sensei says that the randomness, or chaos, embraces a flexible, orderly structure, and he likens the house to an amoeba that has the ability to alter its shape. Similarly, this amoeba can be seen as a microcosm of Japan as a whole.

What are you currently working on and when will it be available?

I’ve finished the first few drafts of a story about Special Needs teens who discover time travel. But the adult teachers at the school find out what’s going on and abuse this ability to travel back into time for their own selfish needs. It turns out the ones with the Special Needs are not the teenagers—who are all somewhere on the Autism spectrum—but the supposed grownups, and it’s up to the teens to save the day. It should be out in autumn.
Thanks for having me! 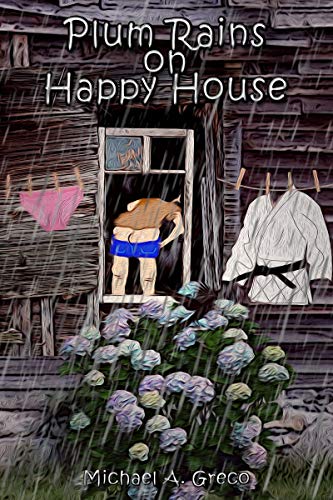 In Japan, the little inn called Happy House welcomes its guests … unless it’s rainy season. When the “plum rains” arrive, trying times of volatility and decadence begin for everyone.

The American in Room 1, however, is dead-set on turning the derelict Happy House into a burgeoning English school.

The house has other plans, and Room 1’s attempts are thwarted by a freakish creature that lives under the floorboards called “the Crat”.

← That Loving Gesture
On Loving →